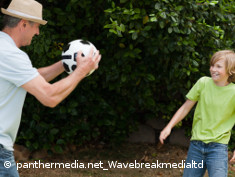 As we age, we lose our anticipatory postural control, the ability to ready ourselves to maintain balance; © panthermedia.net/ Wavebreakmedialtd

The simple training exercise of catching a weighted medicine ball can improve balance and may help prevent falls in the elderly, according to research at the University of Illinois at Chicago.

When someone is jostled by a bump or a stumble, the brain uses two strategies to maintain balance and prevent a fall, says Alexander Aruin, professor of physical therapy at UIC and principal investigator on the two studies.

"When the perturbation is predictable, for example, if when walking down the street you see someone about to bump into you, you brace yourself," Aruin said. The brain activates muscles in anticipation of the jolt.

The second strategy is corrective – the brain engages muscles after the perturbation to prevent us from losing our balance, he said, which might involve taking an extra step, or changing body position.

As we age, we lose our anticipatory postural control, the ability to ready ourselves to maintain balance. As a result, there is no preparatory activation of muscles, Aruin said, leaving us with only compensatory action. In effect, our resources for maintaining balance become more limited, and we become less stable and more prone to falls.

"We know a lot about the elements of postural control," said Aruin, who has studied that mechanism for 20 years. More recently, he and his coworkers began to investigate whether special training or exercises could enhance anticipatory adjustments and help people to utilize them.

The researchers measured the electrical activity of leg and trunk muscles to look for differences in the two age groups' ability to generate anticipatory postural adjustments both before and after the single short training session.

Training-related improvements were seen in both groups. In older adults, the researchers found that not only can they improve, but they also improve at performing a task that was not part of the training.

"There was a transfer effect," he said. "It tells us that – potentially – what people learn in the training might be helpful with other activities.

"Our group is the first to look at whether a specially designed rehabilitation protocol can enhance postural control adjustment and subsequently improve overall balance," Aruin said. He plans now to study the long-term effects of training, which he hopes will show a lasting benefit.

Nearly all the subjects, both young and old, enjoyed the training exercise, Aruin said.

"It seems that most people have very positive memories associated with playing catch," he said.