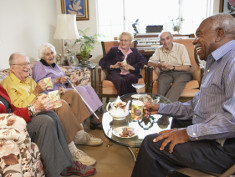 Meeting and interacting with other people is important for older adults’ quality of life; © Monkeybusiness Images/panthermedia.net

Vision and hearing problems reduce the active participation of older people in various events and activities. This was observed in two studies carried out by the Gerontology Research Center.

Impaired vision and hearing make it difficult to interact in social situations. However, social relationships and situations in which there is an opportunity to meet and interact with other people are important for older adults’ quality of life.

"Sensory impairments are common among older adults. About one third of Europeans aged 50 and older were found to have impairment in hearing, vision, or both sensory functions. Sensory problems are markedly more common amongst older age groups," Anne Viljanen says.

"We found that older adults with hearing problems participate in group activities and meet their friends less often than those with good hearing," Tuija Mikkola says. Group activities are challenging for older people with hearing problems, as they often have a great deal of difficulty conversing with several people in a noisy environment. The results also showed that people with hearing difficulties perceived their ability to live their lives as they would like as poorer than those with good hearing.

Tuija Mikkola's study is part of a broader LISPE (Life-Space Mobility in Old Age) study. In the LISPE study, 848 community-dwelling persons aged 75 to 90 years were interviewed. Almost half of the subjects reported some difficulties and one in ten reported major difficulties when conversing with another person in the presence of noise.

Anne Viljanen’s study was carried out in collaboration with a research group from the University of Southern Denmark. The data gathered by the SHARE (Survey of Health, Aging and Retirement in Europe) project includes 11 European countries. More than 27,000 persons 50 years and older from the Nordic countries, Central Europe and the Mediterranean countries participated in SHARE. SHARE did not include Finnish participants.

Anne Viljanen and Tuija Mikkola think that preventive and rehabilitative measures are important in order to support older people with sensory impairments in living socially active lives. It is possible to compensate an impairment of one sense to some extent, for example people with hearing problems are more likely to use visual cues of speech. Thus, it is important to converse face-to-face with people with impaired hearing as it helps facilitate lip-reading. Concomitant hearing and visual impairment also requires special skills from healthcare and rehabilitation personnel, as well as close collaboration between different healthcare specialists.

More about the Academy of Finland at: www.aka.fi