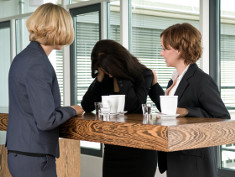 Good work conditions can have an impact on developing diabetes in otherwise healthy employees;
© Werner Heiber/panthermedia.net

Cases of type 2 diabetes continue to rise in the US. And while the development of the disease is more commonly associated with risk factors such as obesity, high blood pressure, and physical inactivity, research has shown that stress can also have a significant impact.

Now Sharon Toker of Tel Aviv University's (TAU) Faculty of Management has found that low levels of social support and high levels of stress in the workplace can accurately predict the development of diabetes over the long term – even in employees who appear to be healthy otherwise. The study contributes to an ongoing body of research linking work conditions to physical and mental health.

The researchers' 3.5-year-long study of male and female employees established that work conditions had a preventative or predictive effect on the development of type 2 diabetes. Participants who reported having a high level of social support at work had a 22 percent lesser chance of developing diabetes over the course of the study. And those who described themselves as either over- or under-worked were 18 percent more likely to develop the disease. The results were controlled for various risk factors including age, family history, activity level, and body mass index.

Toker says these findings paint a grim picture, with a worrying rise in the rate of diabetes in the researchers' middle-aged study cohort, which had a mean age of 48. "You don't want to see working populations have an increasing rate of diabetes. It's costly to both employees and employers, resulting in absenteeism and triggering expensive medical insurance," she explains.

For the study, conducted in collaboration with Arie Shirom of TAU, Galit Armon of the University of Haifa, and Samuel Melamed of the Tel Aviv Yaffo Academic College, researchers recruited 5,843 individuals who visited a health center in Tel Aviv for a routine physical examination sponsored by their employer. On these initial visits, all participants were healthy and had no indication of diabetes.

To assess whether physical and psychological strain caused by the work environment could predict the development of diabetes, Toker and her fellow researchers surveyed the participants according to an "expanded job strain model," which takes into account measures of social support, perceived workload, and perceived control over work pace and objectives.

After the initial interview and examination, the health of all participants was followed for a period of 41 months, over which time 182 participants developed diabetes, reports Toker. When these results were analyzed in relation to reported work conditions, social support emerged as a strong protective factor against the development of the disease, with supported individuals significantly less at risk for diabetes than their unsupported peers. Workload was also correlated with disease development, with employees who felt either overworked or underworked being at increased risk.

The results highlight some of the negative effects of our changing work environment, in which employees are putting in more hours than ever before, says Toker. Beyond the hours spend in the office, technology now allows us to be constantly connected, heightening expectations that work will be completed in non-working hours, ultimately increasing workloads. This takes a heavy toll on our health, she warns.

One of the most interesting findings of the study – that a too-small workload is as harmful as a too-large workload – shows that dramatically reducing the load of a busy employee may not have the desired effect. Employees will be stressed when overloaded, but they still need to feel challenged to be satisfied in their jobs, notes Toker.

She suggests that employers focus on finding the right balance in terms of workload and take the initiative to ensure their employees receive the necessary social support, whether that includes a network of emotional support, praising good work performance, or finding ways to improve office communication.

More about the American Friends of Tel Aviv University at: www.aftau.org