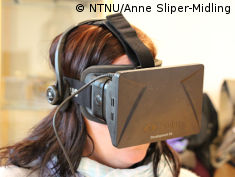 Oculus Rift, a gaming headset, can help teach nurses how to communicate better, researchers at the Norwegian University of Science and Technology have found.

While Facebook wants to make the world’s best online games using the Oculus Rift headset, researchers at Norwegian University of Science and Technology (NTNU) are using the same set-up to help teach nurses how to communicate better.

The Oculus Rift headset gives your body and your mind the powerful experience of being in a virtual world. Your body feels confused, the signals that your brain gets from your eyes do not quite match with what the rest of your body is experiencing. Your heart rate jumps, and you might even feel nauseated. But many are intrigued - and consumed by the experience.

"Forget Google glass. Now it is Oculus Rift that is big. Especially if you want to immerse yourself in another reality," says Ekaterina Prasolova-Førland, an associate professor in NTNU’s Programme for Learning with ICT.

Mark Zuckerberg and Facebook bought the company that makes the Oculus Rift headset for US $2 billion last year.

As reported by The Verge, Facebook and Oculus Rift want to create massively multiplayer online (MMO) games with more than one billion players. NTNU researchers have a little different goal for the unusual virtual reality headset: they are testing how it can be used to train nurses to communicate better.

What makes the Oculus Rift headset so revolutionary - and suggests that it could have applications far beyond online gaming - is its ability to mentally transport the user to a different world in a much more intense way than a regular display. That is what NTNU’s Prasolova-Førland has been thinking.

"We are exploring how this can be used for learning, and have now created a virtual operating room. Today’s specialist nurses and medical students have less and less patient contact because patients are sent home as soon as practicable. As a result, they get less and less training in communicating with patients and with each other. A virtual hospital allows them to train as much as they want," says Prasolova-Førland.

The headsets have been tested on a group of specialist nursing students who were working with various scenarios. They reported that they felt role playing with the 3D headsets was better than just looking at a screen, not only because it was easier and better, but because they felt that they were living the role more realistically. The operating room has also been tested on people who do not work in health care. The idea is to conduct virtual visits and take patients and their families on an informational round of the room before surgery.

"Most game makers are using Oculus Rift, so we have to seize the opportunity while we can so that we can be the first to conduct research on its use in a clinical setting. These glasses are not for sale in the stores yet, but it is possible to buy individual development sets. That is what we have done. The dream is to create a completely virtual hospital where doctors and nurses can work on everything from surgeries to better communication, and so that patients and their families can get the information they need," says Prasolova-Førland.

The headsets were tested in conjunction with Nils Fredrik Kleven, an NTNU master’s student, and teachers from HIST, the Sør-Trøndelag University College.

REHACARE.de; Source: The Norwegian University of Science and Technology (NTNU)

More about The Norwegian University of Science and Technology (NTNU) at: www.ntnu.edu