Preventing diabetes at the office 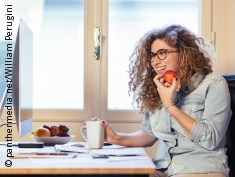 For people who already have high blood sugar, preventing diabetes could amount to just another day at the office. A new study found that employees enrolled in a workplace intervention program as a group lost more weight, showed greater reductions in fasting blood sugar and ate less fat than employees who received only written health guidelines for diabetes prevention.

The employees had been identified through a workplace screening as having prediabetes – higher than normal blood sugar levels – which affects more than a third of American adults. This condition increases risk for type 2 diabetes and cardiovascular disease.

Half of the employees participated in a 16-week group-based intervention that focused on reducing calories and fat to achieve weight loss, increasing regular exercise and attending weekly group discussions during lunch or after work. The other half received usual care: a booklet of strategies for self-regulated weight loss.

"Adults spend a large portion of their time at work. This study shows that it is not only feasible to implement a comprehensive lifestyle intervention at the work site - it is an effective way to prevent disease," said Carla Miller, professor of human nutrition at The Ohio State University and lead author of the study.

"Participants who attended more group discussion sessions and monitored their food and physical activity lost more weight, and weight loss is the primary way to prevent the development of type 2 diabetes," she said.

The research is published in the journal Preventing Chronic Disease.

Miller and colleagues enrolled 69 employees in the study: 35 received the 16-week lifestyle intervention, and 34 were assigned to receive usual care. Eligible employees had a body mass index of at least 25, the lowest measure in the overweight range, and fasting glucose levels of 100 to 125 milligrams per deciliter. Fasting glucose of less than 100 mg/dL is considered normal.

Those in the lifestyle intervention met in groups of 10 to 15 participants weekly with dietitians who served as lifestyle coaches. They were encouraged to set small goals each week to work toward overall goals on weight loss, reduced fat consumption and an increase in physical activity.

In contrast, the control group was invited to attend one informational session on weight-loss principles and received a booklet developed by the National Diabetes Education Program containing guidelines on losing weight. All participants were urged to try to lose 7 percent of their body weight over the 16-week study period.

Miller learned from the workplace diabetes prevention research that people who lose at least 2.5 percent of their body weight within a month are more likely to achieve a 5 percent weight loss by the end of an intervention and keep it off for at least three months after that.

"That first month is critical," Miller said. "And this current study suggests the regular access to lifestyle coaching plays a role in helping people lose weight." This finding also suggests, she said, that once people at risk for diabetes lose weight, they need ongoing support to avoid gaining it back.