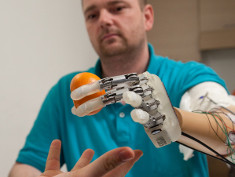 An artificial limb that enables amputees to grasp at an object and feel it as though they were using their real hand: Thanks to Freiburg microsystems engineer Thomas Stieglitz and the international research group participating in the project LifeHand2, this has now become a reality.

Surgeons implanted two ultra-thin electrodes each directly into the ulnar and median nerves in the upper arm of Dennis Aabo Sørensen, a patient with an amputated lower arm. The electrodes send sensory data by means of electrical impulses from the patient's artificial hand directly to his brain over the peripheral nervous system. They give him information about the shape and consistency of the objects he grasps at – even when he cannot see them.

The patient learned to control his artificial hand with only little prior training and more quickly than the scientists had thought possible. He managed to sense objects like a plastic cup, a mandarin orange, and a heavy block of wood while being blindfolded and to take hold of them with a precise grip and the right amount of force. The combination of technology and the patient's biological system worked almost intuitively.

The electrodes were developed in Thomas Stieglitz' laboratory, professor of Biomedical Microtechnology at the Department of Microsystems Engineering of the University of Freiburg. "Our research helps patients who have lost a limb to move their prostheses in a completely natural way. It is always a very special moment for me as an engineer to see technological developments be implemented successfully on a patient after many years in the lab," said the researcher. As this was only an initial test, the electrodes will have to be removed after 30 days as per the European directive on medical devices. The team plans to conduct further studies on patients in Rome, Italy; Lausanne, Switzerland; and Aalborg, Denmark.

Six research institutions in Italy, Switzerland, and Germany are participating in the project LifeHand 2. Launched in 2008, the project originated from the European Union-funded project TIME and the Italian project NEMESIS. The clinical director of the study is Paolo Maria Rossini, and the operation was performed by Eduardo Marcos Fernandez. Both are from the Agostino Gemelli University Polyclinic in Rome. The project director is Silvestro Micera from the Swiss Federal Institute of Technology in Lausanne.

More about the Albert-Ludwigs-Universität Freiburg at: www.uni-freiburg.de