Prosthetic Hands Viewed as Eerie by the Public 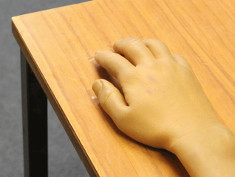 Members of the public would prefer to look at human hands or robotic hands rather than prosthetic hands which they view as eerie, a new study by The University of Manchester has shown.

But prosthetic hands which looked more human-like were rated as less eerie, the academics found. Researchers hope their study and future work in this area will help improve designs for prosthetic limbs.

Earlier research has shown that people find robots that look as close to being human more uncomfortable than those which are clearly not human. But this research has focused on faces or whole bodies.

The University of Manchester study explored the theory with hands. 43 right-handed participants, 36 female and seven male, viewed a series of photographs of human, robotic and prosthetic hands and graded them on a nine-point scale in terms of eeriness or human-likeness.

Ellen Poliakoff, based in the University's School of Psychological Science who led the research, now plans to carry out further experiments. “Our findings show hands are viewed in a similar way to previous experiments which have looked at faces and bodies,” Poliakoff said. “Finding out more about this phenomenon, known as the uncanny valley, may help with the design of prosthetic limbs.”

Emma Gowen, based in the University's Faculty of Life Science who also worked on the research, added: “We hope this and further research will allow us to learn more about social perception and what is special about perceiving another human being. Determining what factors contribute to eeriness can help us to understand how we interpret and respond to other people.”