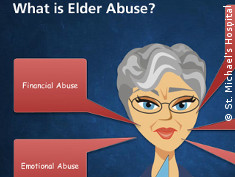 Elder abuse is a serious and often unreported health issue. It is estimated that as many as 10 percent of hospital patients age 65 and over are victims of abuse. For every case that is reported, an estimated 23 cases are not.

Up to 30 percent of inpatients at St. Michael’s are elderly, with most on the cardiology, medicine and orthopedic units.

"We’ve come up with a multi-pronged approach to raising awareness of elder abuse," said Marisa Cicero, professional practice and education leader in Social Work. The first step has been to raise awareness of elder abuse with elearning modules, lunch and learn and facilitated sessions. More than 375 staff members have received training.

The social work team also created an elder abuse algorithm, providing tips for working with elderly patients and contact details for resources that are available 24/7.

There has also been a telephone pilot program offering a telephone consultation with a social worker. This service is available Monday to Friday from 8 a.m. to 4 p.m. "We encourage staff to call," said Cicero. "No question is too small or insignificant. We’ll do our best to help."

The World Health Organization defines elder abuse as a "single or repeated act or lack of appropriate action occurring within any relationship where there is an expectation of trust which causes harm or distress to an older person." Some of the risk factors of elder abuse are poverty, functional impairment and social isolation.

"The things that make you most vulnerable also make it difficult to report," said Cicero. "There’s also the shame and stigma of being a victim of any type of abuse, but particularly for elder abuse, that makes it difficult. It’s difficult to say I need help in the first place."

Another complication is that in many cases, the abuser is often the victim’s adult children or spouse, someone the person relies on for support. The telephone pilot will continue for six months, along with more facilitated training sessions that will be advertised in the Daily Dose or by calling the Social Work office directly.