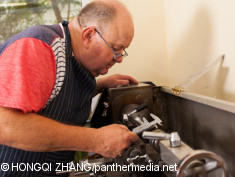 The age of retirement is often discussed; © panthermedia.net/ HONGQI ZHANG

The age to receive full Social Security benefits should be closer to 70, according to a report published in the journal Daedalus.

"We're living longer and healthier than ever before, but the statutory age of retirement for receiving Social Security benefits doesn't reflect that," says lead author S. Jay Olshansky, professor of epidemiology in the University of Illinois at Chicago School of Public Health.

When Social Security was enacted in 1935, the age of full retirement was set at 65. Back then, a 25-year-old had a 62.4 percent chance of living to retirement age, and a 65-year-old retiree lived, on average, for another 12.6 years.

"If we calculated retirement age using the same ratio of retired to working years present in 1935, the age of eligibility for full benefits today would be close to 70 years old, and the age for early retirement would be 66.5 years old," Olshansky said. "But raising the age of retirement would further exacerbate disparities in Social Security entitlements and place increased financial burdens on populations with lower life expectancies."

In other words, people in population groups with lower life expectancies would continue to pay into Social Security the same as anyone else, while becoming even less likely than they already are to live to see retirement – and those who do reach retirement would draw benefits for even fewer years, as compared to other groups.
From the beginning of Social Security, the age of retirement was intended to be adjusted periodically as life expectancy increased. But, Olshansky said, the few adjustments that have been made have been "too little, too late."

The first significant adjustment to the full retirement age came in 1983, when it was raised from 65 to 67. But the change didn't go into effect until 2006 and won't be fully realized until 2027.

Previous research has shown that level of education and longevity are linked. In 2008, only 74.4 percent of 25 year olds who had less than a high school education survived to age 65, while 92.1 percent of their peers with a college degree or its equivalent years of education would do so. Higher levels of education are associated with higher income, access to better health care and nutrition, better odds of survival to age 65, and longer post-retirement life expectancies. However, the retirement age for Social Security is the same for everyone.

While adjustments to the retirement age have not kept up with increases in life expectancy or healthy lifespan, Olshansky says he and his co-authors do not recommend an adjustment based solely on recent changes in longevity, which would push both the early and full retirement ages back significantly.

"Additional reforms would be needed to minimize disparities that would be worsened if the age of retirement were increased," he said.