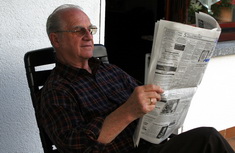 Simple activities, like reading the newspaper
or writing, can contribute to a healthier brain;
© Brigitta Müller/panthermedia.net

Mental activities like reading and writing can preserve structural integrity in the brains of older people, according to a new study presented today at the annual meeting of the Radiological Society of North America (RSNA).

While previous research has shown an association between late-life cognitive activity and better mental acuity, the new study from Konstantinos Arfanakis, and colleagues from Rush University Medical Center and Illinois Institute of Technology in Chicago studied what effect late-life cognitive activity might have on the brain's white matter, which is composed of nerve fibers, or axons, that transmit information throughout the brain.

"Reading the newspaper, writing letters, visiting a library, attending a play or playing games, such as chess or checkers, are all simple activities that can contribute to a healthier brain," Arfanakis said.

"In healthy white matter tissue, water can't move as much in directions perpendicular to the nerve fibers," Arfanakis said. "But if, for example, you have lower neuronal density or less myelin, then the water has more freedom to move perpendicular to the fibers, so you would have reduced diffusion anisotropy. Lower diffusion anisotropy values are consistent with aging."

The study included 152 elderly participants, mean age 81 years, from the Rush Memory and Aging Project, a large-scale study looking at risk factors for Alzheimer's disease. Participants were without dementia or mild cognitive impairment, based on a detailed clinical evaluation. Researchers asked the participants to rate on a scale of 1 to 5 the frequency with which they participated in a list of mentally engaging activities during the last year. Among the activities were reading newspapers and magazines, writing letters and playing cards and board games.

Participants underwent brain MRI using a 1.5-T scanner within one year of clinical evaluation. The researchers collected anatomical and DTI data and used it to generate diffusion anisotropy maps. Data analysis revealed significant associations between the frequency of cognitive activity in later life and higher diffusion anisotropy values in the brain.

According to Arfanakis, diffusion anisotropy drops gradually beginning at around age 30. "Higher diffusion anisotropy in elderly patients who engage in frequent cognitive activity suggests that these people have brain properties similar to those of younger individuals," he said.

The researchers will continue to follow the study participants with an eye toward comparing the diffusion anisotropy results over time. "In these participants, we've shown an association between late-life cognitive activity and structural integrity, but we haven't shown that one causes the other," Arfanakis said. "We want to follow the same patients over time to demonstrate a causal link."


- More about the Radiological Society of North America at: www.rsna.org