Recovery of language capacity right after a stroke 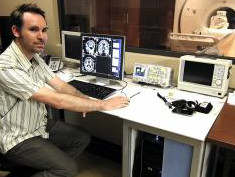 An interdisciplinary group of researchers at the University of Arizona (UA) has been awarded a $2 million grant from the National Institutes of Health to study language abilities in patients recovering from a stroke. The findings are expected to guide the development of treatments that would help patients regain as much of their language skills as possible.

"Speaking and comprehending language is something we take for granted. But when you think about the complexity of language, it's actually a very complicated process our brain has to carry out," said Stephen Wilson, an assistant professor in the UA Department of Speech, Language and Hearing Sciences and the principal investigator of the study. "There are several brain regions, mostly in the left hemisphere, that we know are important for speech and language. When one of these areas is damaged, you get aphasia."

One of the most common and debilitating consequences of a stroke is the loss of the ability to speak, read or write. Collectively referred to as aphasia, such acquired communication disorders affect about 1 million Americans.

Aphasia comes in many different forms. Depending on which part of the brain is affected, a patient may have difficulty producing spoken or written language, or a patient may speak rather fluently but have trouble retrieving the names for people and everyday objects, or in putting together sentences.

The UA scientists are going to work with patients in the first three months after a stroke, and will combine language assessments with a comprehensive battery of brain imaging techniques. "We know that a lot happens in those early days, weeks and months," Wilson said. "The greatest behavioral gains take place during this time – even when patients do not receive treatment – and by looking at the natural recovery process during that time, we can potentially understand more about what neural processes underlie successful recovery."

Depending on the severity of the stroke and the affected regions, the brain is able to restore some or nearly all language functions through rewiring of neural circuits or transferring language-processing tasks to regions unaffected by the stroke. The researchers hope to shed light on why some patients recover most or nearly all language functions, while others make few gains and remain chronically aphasic. A better understanding of the neural processes in successful recovery will improve the accuracy of prognoses, in other words, help doctors better predict the prognosis of stroke patients. This should lead to better medical treatments and behavioral interventions.

"It has been a challenge to study treatment before we understand the natural course of recovery," Wilson explained. "It's not really known whether it's a good idea to start treatment right away or whether it's better to wait."

The UA study will evaluate patients' language performance and simultaneously look at their brains with different imaging techniques to yield the best insight of the brain and how it functions in the wake of a stroke with regard to language tasks.

Wilson noted the combination of the UA's interdisciplinary academic culture and its world-class medical imaging facility. His department – part of the School of Mind, Brain and Behavior in the UA College of Science – has been ranked among the best in the U.S. for more than 25 years and has long been a leader in the study of stroke and aphasia treatment. This new study complements several research projects being conducted through the department that involve patients later in their recovery.

More about the University of Arizona at: www.arizona.edu