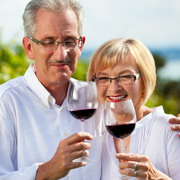 In a stride toward better health in later life, scientists reported that resveratrol, the so-called "miracle molecule" found in red wine, might help improve mobility and prevent life-threatening falls among older people.

The finding, believed to be the first of its kind, was presented today to some 14,000 scientists and others gathered at the 244th National Meeting & Exposition of the American Chemical Society, the world's largest scientific society.

The researchers say this report — based on studies of laboratory mice — could lead to the development of natural products designed to help older Americans live safer and more productive lives.

"Our study suggests that a natural compound like resveratrol, which can be obtained either through dietary supplementation or diet itself, could actually decrease some of the motor deficiencies that are seen in our aging population," said Jane E. Cavanaugh. "And that would, therefore, increase an aging person's quality of life and decrease their risk of hospitalization due to slips and falls."

Cavanaugh notes that falls become more common with advancing age and are the leading cause of injury-related death among people older than 65. In addition, about one in three older Americans have difficulty with balance or walking, according to the American Geriatrics Society.

These mobility problems are particularly common among older people who have Parkinson's disease and other age-related neurological disorders, Cavanagh said. She is with Duquesne University in Pittsburgh. However, while drugs can help alleviate some of the motor-related problems in Parkinson's disease, Cavanaugh points out that there are no comparable treatments for balance and walking problems in otherwise healthy older adults. She and her colleagues set out to rectify that, focusing on natural chemical compounds such as resveratrol.

Previous studies have shown that resveratrol — an antioxidant found in red wine and dark-skinned fruits — might help reduce inflammation, lower cholesterol, slash the risk of heart disease and certain cancers and, perhaps, have some anti-aging effects in the body. Resveratrol is available as a dietary supplement and is abundant in foods such as red grapes, blueberries and nuts.


- More about the American Chemical Society at: portal.acs.org