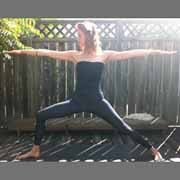 Physical pain can be reduced by
yoga; © Curtis

A new study by York University researchers finds that practicing yoga reduces the physical and psychological symptoms of chronic pain in women with fibromyalgia.

The study is the first to look at the effects of yoga on cortisol levels in women with fibromyalgia. The condition, which predominantly affects women, is characterized by chronic pain and fatigue; common symptoms include muscle stiffness, sleep disturbances, gastrointestinal discomfort, anxiety and depression.

Previous research has found that women with fibromyalgia have lower-than-average cortisol levels, which contribute to pain, fatigue and stress sensitivity. According to the study, participants' saliva revealed elevated levels of total cortisol following a program of 75 minutes of hatha yoga twice weekly over the course of eight weeks.

"Ideally, our cortisol levels peak about 30-40 minutes after we get up in the morning and decline throughout the day until we're ready to go to sleep," says the study's lead author, Kathryn Curtis, a PhD student in York's Department of Psychology, Faculty of Health. "The secretion of the hormone, cortisol, is dysregulated in women with fibromyalgia" she says.

Cortisol is a steroid hormone that is produced and released by the adrenal gland and functions as a component of the hypothalamic-pituitary-adrenal (HPA) axis in response to stress.

"Hatha yoga promotes physical relaxation by decreasing activity of the sympathetic nervous system, which lowers heart rate and increases breath volume. We believe this in turn has a positive effect on the HPA axis," says Curtis.

Participants completed questionnaires to determine pain intensity pre- and post-study; they reported significant reductions in pain and associated symptoms, as well as psychological benefits. They felt less helpless, were more accepting of their condition, and were less likely to "catastrophize" over current or future symptoms.

"We saw their levels of mindfulness increase – they were better able to detach from their psychological experience of pain," Curtis says. Mindfulness is a form of active mental awareness rooted in Buddhist traditions; it is achieved by paying total attention to the present moment with a non-judgmental awareness of inner and outer experiences.

"Yoga promotes this concept – that we are not our bodies, our experiences, or our pain. This is extremely useful in the management of pain," she says. "Moreover, our findings strongly suggest that psychological changes in turn affect our experience of physical pain."


- More about the York University at: www.yorku.ca