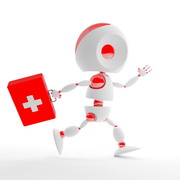 When it comes to stroke rehabilitation, it takes a dedicated team to help a person regain as much independence as possible: physicians, nurses, physiotherapists and others. Now, a University of Calgary research team had added a robot to help identify and customize post-stroke therapy.

Rehabilitation robots improve detection of post-stroke impairments and can enhance the type and intensity of therapy required for recovery, according to a study.

“For years, therapists have known that limb awareness is very important to predicting a person’s outcomes after stroke. Yet we have never before been able to quantify it,” says lead researcher Doctor Sean Dukelow. “Identifying these deficits opens the door to the next step: how do we treat it?”

Until now, rehabilitation experts have relied on their judgment and subjective rating scales to assess impairment after stroke. Robotic technology standardizes these measurements.

“Awareness and control of our limbs’ location allows us to do everyday things like reach for a coffee cup while watching television,” Dukelow says.

In the Calgary study, a robotic frame moved each patient’s stroke-affected arm at a preset speed and direction while they attempted to mirror its movement with their unaffected arm. Participants were not able to rely on their vision for assistance.

• 20 per cent of the stroke patients failed to acknowledge that the robot had moved their affected arm;

• 70 per cent of stroke patients took significantly longer to react to the robot’s movements;

• 78 per cent of stroke patients had significantly impaired sense of movement direction; and

• 69 per cent had diminished ability to match movement speed.

“Impaired limb function is a serious problem for people with stroke,” says Doctor Mark Bayley. “It can prevent people from performing small daily tasks that give them some measure of independence.”

The final goal of precise assessment is more patient-specific treatment, a concept Dukelow calls “personalized medicine.” Ideally, robotics will be used to guide patients through the repetitive movements and personalized treatment plans required to remap the brain and restore function.


- More about the Heart and Stroke Foundation of Canada at: www.heartandstroke.com