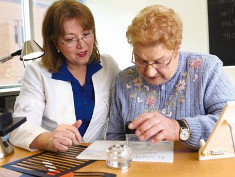 Depression is a common risk for people who have lost their vision from age-related macular degeneration (AMD), but a new study shows that a type of rehabilitation therapy can cut this risk in half. The study was funded by the National Eye Institute (NEI), part of the National Institutes of Health.

As the disease progresses, it can cause a growing blurred area near the center of vision, and lead to difficulty with everyday activities, including the ability to drive, read, write, watch television, cook, and do housework. Activities that used to be fun and fulfilling may begin to seem burdensome or even impossible. With loss of the ability to drive and navigate unfamiliar places, it becomes easier to stay at home than to see friends or meet new people. All of this can take a toll on mental health, and past studies have found that as many as one-third of people with bilateral AMD develop clinical depression.

"The depression is a response to disability, so we reasoned an effective treatment would be to reduce the disability through rehabilitation," said Barry Rovner, a professor of psychiatry and neurology at the Sidney Kimmel Medical College at Thomas Jefferson University in Philadelphia. In the Low Vision Depression Prevention Trial (VITAL), he led a team of psychologists, ophthalmologists, optometrists, and occupational therapists to test an approach called behavior activation.

"Behavior activation involves helping people to focus on activities they enjoy, to recognize that loss of those activities can lead to depression, and to re-engage in those activities," said Robin Casten, a co-author and an associate professor of psychiatry and human behavior at Jefferson. Helping people maintain an active social life is an important part of the approach, she said.

The trial recruited 188 participants with bilateral AMD from an ophthalmology practice affiliated with Wills Eye Hospital in Philadelphia. The participants were 84 years of age on average, 70 percent were women, and 50 percent lived alone. All had a best-corrected vision of less than 20/70. (A person with 20/70 vision sees an object from 20 feet away as clearly as a person with normal vision sees it at 70 feet away.) Each participant had mild depressive symptoms and was at risk for developing clinical depression, based on a nine-item depression subtest of the Patient Health Questionnaire, or PHQ-9.

During the trial, the participants had two visits with an optometrist, during which they were prescribed low-vision devices such as handheld magnifiers. After those initial visits, the participants were randomly split into two groups.

One group received behavior activation from an occupational therapist specially trained in the approach. The occupational therapist worked with participants to guide them on using the low-vision devices, to make changes around the home (such as using brighter lights and high-contrast tape), to increase their social activities, and to help them set personal goals and break these down into manageable steps.

The second group of participants served as a control group. They talked about their difficulties to a therapist, but did not receive behavior activation or low-vision occupational therapy. Both groups had six one-hour therapy sessions in their homes over a two-month period. All participants were allowed to take antidepressants, but less than 10 percent did so. All received medical management of AMD as prescribed by their primary eye care providers.

Rovner said he hopes the study will serve as a model for similar approaches to preventing and treating depression in AMD. When approved by a physician, occupational therapy is reimbursable through Medicare. "Stronger links between primary eye care and mental health care workers would be needed to make behavior activation more widely available for AMD patients," Rovner said. Specialized instruction would also be needed for occupational therapists, who are not typically trained in behavior activation. "We built this to be an affordable treatment. Now we would like to see it become accessible," he said. The study is continuing to follow participants to see if the benefits of treatment are maintained out to one year.

More about the NIH/National Eye Institute at: www.nei.nih.gov