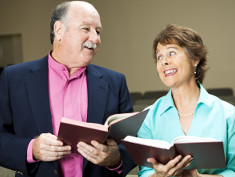 These associations are similar for blacks and whites, women and men, and individuals of both low- and high-socioeconomic status.
The article was authored by Matt Bradshaw, of Baylor University; Christopher G. Ellison, of the University of Texas-San Antonio; Qijan Fang, of Bowling Green State University; and Collin Mueller, of Duke University.

"Religion is an important socioemotional resource that has been linked with desirable mental health outcomes among older U.S. adults," the authors stated. "This study shows that listening to religious music may promote psychological well-being in later life."

The data for the study come from two waves (taken in 2001 and 2004) of the nationwide Religion, Aging, and Health Survey of older black and white U.S. adults. The population consisted of household residents who were either black or white, non-institutionalized, English speaking, and at least 65 years of age. Responses were only collected from currently practicing Christians, those who identified as Christians in the past but no longer practice any religion, and those not affiliated with any faith at any point in their lifetime. The present analysis is based upon 1,024 individuals who participated in both waves of the survey.

"Given that religious music is available to most individuals – even those with health problems or physical limitations that might preclude participating in more formal aspects of religious life – it might be a valuable resource for promoting mental health later in the life course," the authors wrote.

The survey respondents were asked how often they listened to both religious music and gospel music on a scale ranging from "never" to "several times a day." Death anxiety, life satisfaction, self-esteem, and sense of control were measures how strongly the respondent agreed with a series of statements. These included, but were not limited to, "I find it hard to face up to the fact that I will die," "These are the best years of my life," "I take a positive attitude toward myself," and "I have a lot of influence over most things that happen in my life."

More about The Gerontological Society of America at: www.geron.org