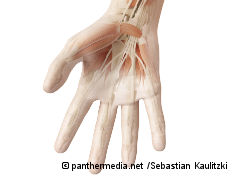 Three groups of researchers who have received support from the National Institutes of Health will obtain funding from the President's BRAIN Initiative to improve artificial limb technology. The new awards will be funded and administered by the Defense Advanced Research Projects Agency (DARPA) and will build on the fundamental discoveries that were made possible by NIH support.

"These projects speak to the power of integrated government-funded science. NIH support enables bright inquisitive scientists to develop whole new areas of research. Now, as part of ambitious DARPA projects, these groups will have the opportunity to turn their discoveries to benefit amputees, particularly those brave men and women who lost their limbs defending our country," said Dr. Walter Koroshetz, acting director of the NIH's National Institute of Neurological Disorders and Stroke (NINDS), one of the institutes that supported the research.

The new awards are part of Hand Proprioception and Touch Interfaces (HAPTIX), a DARPA program to enhance neural prosthetics by improving their ability to realistically sense touch and movement.

"The BRAIN Initiative provides a wonderful platform for collaboration between NIH and DARPA as well as other federal agencies to work towards the common goal of improving the lives of wounded service members. By joining forces we can quickly move this important technology from the lab to the clinic," said Koroshetz.

"This is a wonderful example of how NIH's investment in the development of novel biomedical technologies opens up a range of possibilities for treating different medical conditions," said Roderic Pettigrew, Ph.D., M.D., director of the National Institute of Biomedical Imaging and Bioengineering (NIBIB), an NIH institute that supported the research. "We are thrilled to see this technology move forward with new and impactful applications."

More about the NIH/National Institute of Neurological Disorders and Stroke at: www.ninds.nih.gov