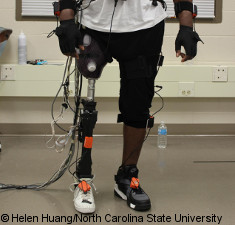 Powered lower limb prosthetics hold promise for improving the mobility of amputees, but errors in the technology may also cause some users to stumble or fall. New research examines exactly what happens when these technologies fail, with the goal of developing a new generation of more robust powered prostheses.

"My work has focused on developing technology that translates electrical signals in human muscle into signals that control powered prosthetic limbs – such as decoding muscle signals to tell a prosthetic leg that it needs to walk forward or step up onto a staircase," says Helen Huang, senior author of a paper on the work and an associate professor in the joint biomedical engineering program at North Carolina State University and the University of North Carolina at Chapel Hill.

"But sometimes this 'decoding' technology makes mistakes, such as thinking someone wants to climb a step when he doesn't," says Fan Zhang, lead author of the paper and a Ph.D. student in the joint biomedical engineering program. "This is a problem, because we don't want to put users at risk of stumbling or falling."

Huang's team set out to understand exactly what happens to users of powered prosthetic legs when there's an error in the decoding technology. "We not only want to improve the decoding accuracy, but determine which errors are important and which have little or no impact on users," Huang says. "Understanding the problem is an important step in finding ways to make these prostheses more reliable."

To address the issue, the researchers had study subjects use a customized prosthetic device that was programmed to make errors. This was done in a lab setting that allowed Huang's team to monitor each user's balance and biomechanics. Users were also asked how stable they felt during each trial.

The researchers found that some errors were so insignificant that users didn't even notice them – particularly errors that were short in duration or that occurred when a user's weight was not being applied to the prosthetic leg.

But errors that lasted longer, or that occurred when a user's weight was on the prosthetic limb, were more noticeable. The researchers also determined that critical, or especially noticeable, errors were also characterized by a large "mechanical work change," meaning the prosthetic limb thought it had to do significantly more or less work than the user intended.

"One of the things we'll be doing as we move forward with this work is seek ways to limit that mechanical work change," Huang says. "Any system that involves a human interface will have occasional errors," Huang notes. "But we think we can find ways to make those errors effectively insignificant."

More about the North Carolina State University at: www.ncsu.edu