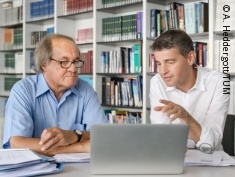 Tinnitus and chronic pain have more in common than their ability to afflict millions with the very real experience of "phantom" sensations. Scientists noted similarities between the two disorders more than thirty years ago. Now advances in brain imaging and associated techniques have enabled researchers to begin homing in on their structural and functional bases, revealing what appears to be a central gatekeeping system implicated in both chronic pain and tinnitus. Collaborators at the Technical University of Munich (TUM) and Georgetown University Medical Center integrate the latest findings into a disease model of both disorders in the journal Trends in Cognitive Sciences.

People with tinnitus hear sounds that aren't there, usually described as a ringing or buzzing "in the ears" even though such perceptions clearly arise in the brain. Hearing loss is often associated with tinnitus but does not adequately account for it. Furthermore, not everyone with damaged cochlear nerves or cortical auditory circuits experiences tinnitus. One hypothesis suggests that the decisive factor is whether or not a higher-level cognitive system responsible for "tuning out" negative sensory signals is working normally.

This view of tinnitus was hailed as a paradigm shift by people in the field when it was first proposed, in 2010, by Prof. Josef Rauschecker, Director of the Laboratory for Integrative Neuroscience and Cognition at Georgetown University and a Hans Fischer Senior Fellow of the TUM Institute for Advanced Study. Mounting evidence has strengthened the case, as improved techniques allow higher-resolution studies of changes in the brain.

Close collaboration between Rauschecker's lab and PainLabMunich, led by TUM Prof. Markus Ploner, has extended this research into the common ground that tinnitus shares with chronic pain. And that common ground now has an address in the brain. Structural and functional changes in the same brain circuit - including the ventromedial prefrontal cortex and the nucleus accumbens – can open the gateway to both tinnitus and pain that persists long past any acute cause.

The list of techniques that have contributed to this study is long and perhaps a bit esoteric-sounding, including functional magnetic resonance imaging, voxel-based morphometry, arterial spin labeling, positron emission tomography, and diffusion tensor imaging, as well as electroencephalography and magnetoencephalography. Results from these diverse approaches – which essentially measure structural characteristics such as gray matter volume and functional properties such as network function – have been correlated with and interpreted in the light of neurochemical studies.

In their new paper Rauschecker and Ploner, together with postdoctoral researchers Audrey Maudoux (Georgetown) and Elisabeth May (TUM), present copious evidence that similar structures and functional systems are involved in tinnitus and chronic pain and probably play a central role in both. Significant loss of gray matter and compromised circuit function are observed in the suspected regions, with considerable overlap between neurological changes in tinnitus and chronic pain sufferers.

All of these areas are also important for evaluating and modulating emotional experiences, Rauschecker says. "These areas act as a central gatekeeping system for perceptual sensations, which determines the affective value of sensory stimuli – whether produced externally or internally – and modulates information flow in the brain. Tinnitus and chronic pain occur when this system is compromised."

The researchers propose that this newly identified gatekeeping system determines the relevance and affective value of sensory stimuli and controls information flow along pathways associated with the so-called executive functions. The process, they say, is controlled by two major neurotransmitters, dopamine and serotonin. Damage to this system, they argue, affects the perception of sensory signals in such a way that either tinnitus or chronic pain can develop and carry on in a self-perpetuating loop.

They stress that there are still a number of open questions, particularly in relation to potential clinical interventions. Yet they see reason to be cautiously optimistic. Better understanding could lead to standardized assessment of individuals' risk to develop chronic tinnitus and chronic pain. This in turn might open the way for preventive action and early treatment, including for example cognitive-behavioral therapy, physiotherapy, and pharmacotherapy.

"However," Markus Ploner adds, "better understanding might allow not only for early treatment, but also for more targeted and individual treatment with existing as well as novel strategies, such as dopaminergic therapy." Ploner is a consultant neurologist at TUM as well as Heisenberg Tenure Track Assistant Professor of Human Pain Research.

More about the Technical University of Munich (TUM) at: www.tum.de