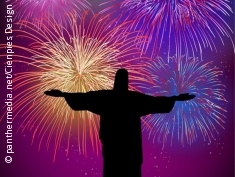 Rio 2016 event planners joke they are competing with Olympic organisers to put on the best show; © panthermedia.net/Cienpies Design

The people behind the Rio 2016 Paralympic Games opening ceremony have given a sneak preview into the preparations and vision that will underpin the spectacular show. Flávio Machado, who is responsible for staging the huge new year’s eve celebrations on Copacabana beach every year, said the concept behind the ceremony was captured in the phrase: "The heart knows no limits".

The objective of the show will be to "launch a fresh way of looking at disability," said Machado. "We all have impairments or imperfections, it’s part of our diversity. The point is to break boundaries, to overcome, and this comes from willpower – from the heart."

Machado was speaking to journalists at the organising headquarters last week along with the rest of the team that is planning the event: writer and journalist Marcelo Rubens Paiva, artist Vik Muniz and designer – and creator of the Rio 2016 Paralympic Games logo – Fred Gelli.

While taking care not to reveal too much and "spoil the surprise", the panel reiterated the call for volunteers from around the world to perform in the ceremony ahead of the deadline on 30 September, saying that 4,000 people would be needed.

"Spirit in movement" was the phrase used by Gelli when asked to give a clue about the opening ceremony. "We are thinking about infinite energy, about rising from the deep end to the top of the podium. There are no limits."

Muniz said the ceremony would be surprising and would mix humour, energy and, of course, Brazilian rhythm. Rubens Paiva, who is a wheelchair user and covered the Athens 2004 Paralympic Games as a journalist, said the Games are all about high-performance sports, which can help integrate society. He joked that the team was competing with the Olympic Games ceremony planners to put on the best show.

The fact that both the Olympic and Paralympic Games opening and closing ceremonies will be staged at the Maracanã Stadium means that the majority of the technical infrastructure – such as lighting, sound equipment and overhead performance cables – would already be installed for the Paralympic shows.

"As the stadium does not have a running track (athletics will take place at the Olympic Stadium) this allows the public to be closer to the spectacular, which will make the show more intimate," Machado said.

Tickets for the Rio 2016 Paralympic Games will go on sale on 7 September, the day the city will celebrate the one year until the opening ceremony milestone with a sports and culture festival.