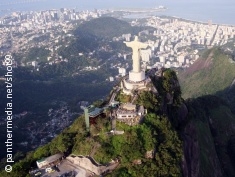 The event in Rio de Janeiro will feature top Paralympic athletes and coincide with start of ticket sales in Brazil; © panthermedia.net/shot99

Rio 2016 will celebrate the one year until the Paralympic Games milestone on September 7 by staging a Paralympic Festival alongside the iconic Lagoa Rodrigo de Freitas in the heart of the city. The event, which will be staged on the same day that tickets to the Games go on sale, will feature a range of sporting activities – involving some top Brazilian and international Paralympic stars – and cultural and educational attractions.

Lagoa, which will host the rowing and canoe events during the Olympic and Paralympic Games, is a hugely popular leisure attraction among Rio’s residents and visitors, with the lighting of the giant Christmas tree that sits in the middle of the lake drawing thousands of spectators every year. The Paralympic Festival will be similarly family-themed, with the chance to watch and take part in Paralympic sports and interact with Rio 2016 Paralympic Games mascot Tom.

The open-air event will take place on a public holiday in Brazil at Parque dos Patins, a park alongside Lagoa. It will showcase Paralympic sports such as wheelchair basketball, five-a-side football for the visually impaired and sitting volleyball. Top-athletes, celebrities and the public will be invited to take part, and there will be workshops for children.

There will also be a photography exhibition celebrating Paralympic athletes and an installation displaying technological innovations that have helped improve quality of life for people with a disability.

The objective of the festival is to "understand the rhythm and abilities of Paralympic athletes", said Rio 2016 executive director of communications Mario Andrada, who presented the plans to journalists at the Rio 2016 headquarters on Thursday (27 August).

As Rio warms up for next year’s Games and seeks to build public awareness, it was also announced that city trains will be decorated with Paralympic Games imagery and extracts from the work of Brazilian poet Cora Coralina, in an initiative linked to the Rio 2016 culture programme.

The event follows the success of the interactive sport festival that Rio 2016 staged in Flamengo Park last year, to celebrate the two years until the Games milestone.