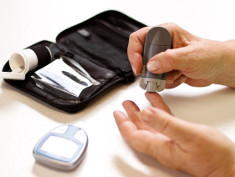 Patients with type 2 diabetes are twice as likely to develop dementia as those without the disease; © Miriam Dörr/
panthermedia.net

Researchers at Kaiser Permanente and the University Medical Centre Utrecht in the Netherlands have created the first risk score that predicts the 10-year individualized dementia risk for patients with type 2 diabetes.

The researchers developed and validated the Diabetes-Specific Dementia Risk Score by examining data from nearly 30,000 patients with type 2 diabetes aged 60 and older over a 10-year period. They found eight factors that were most predictive of dementia – including microvascular disease, diabetic foot and cerebrovascular disease – and assigned each a value related to their association with dementia to create an overall score for patients. The researchers found that individuals in the lowest category of the 20-point risk score had a 5.3 percent chance of developing dementia over the next 10 years, while those in the highest category had a 73 percent chance. Compared with those in the lowest category, those in the highest were 37 times more likely to get dementia, according to the study.

"Patients with type 2 diabetes are twice as likely to develop dementia as those without the disease, but predicting who has the highest future risk is difficult," said Rachel Whitmer, an epidemiologist at the Kaiser Permanente Division of Research in Oakland, California, who led the study. "While a few dementia risk scores exist, this is the first one that has been developed specifically for individuals with type 2 diabetes and encompasses diabetes-specific characteristics."

All predictors included in the Diabetes-Specific Dementia Risk Score are easy to obtain and based primarily on medical history, so the risk score can be calculated during a routine medical visit or with electronic health records. No labor-intensive or expensive tests, such as cognitive function or brain imaging, are required.

"This risk score is crucial for the care of patients with diabetes since they are particularly susceptible to dementia. It provides clinicians with an easy and efficient tool to assess their patients' chances of developing dementia over the next 10 years," Whitmer said. "Early detection of diabetes patients who are at increased future risk of dementia could help to develop and target preventive treatment."

According to the Centers for Disease Control and Prevention, more than 25 million children and adults in the United States have diabetes with type 2 diabetes in particular accounting for more than 90 percent of these cases. In addition to being a risk factor for dementia, diabetes is the leading cause of kidney failure, non-traumatic lower-limb amputations and new cases of blindness among adults in the United States.

"The risk score could be useful in the selection of high-risk patients for early intervention studies and for many applications of personalized medicine," said Geert Jan Biessels, University Medical Centre Utrecht, and co-author of the study. "Clinicians can use it to guide their decisions in terms of clinical attention to incipient cognitive impairment which makes people vulnerable to dangerous side-effects of diabetes treatment. The risk score will also help us to understand the causes of diabetes associated increased dementia risk, because we can examine those at high risk in early stages of the dementia process."

More about Kaiser Permanente at: www.kp.org