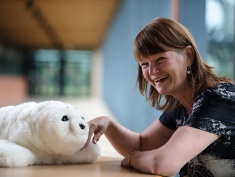 PARO is fitted with artificial intelligence software and tactile sensors that allow it to respond to touch and sound;
© Northumbria University

Robotic animals can help to improve the quality of life for people with dementia, according to new research. A study has found that interacting with a therapeutic robot companion made people with mid- to late-stage dementia less anxious and also had a positive influence on their quality of life.

The pilot study, a collaboration led by Wendy Moyle from Griffith University, Australia and involving Glenda Cook from Northumbria University and researchers from institutions in Germany, investigated the effect of interacting with PARO – a robotic harp seal – compared with participation in a reading group.

PARO is fitted with artificial intelligence software and tactile sensors that allow it to respond to touch and sound. It can show emotions such as surprise, happiness and anger, can learn its own name and learns to respond to words that its owner uses frequently.

Eighteen participants, living in a residential aged care facility in Queensland, Australia, took part in activities with PARO for five weeks and also participated in a control reading group activity for the same period. Following both trial periods the impact was assessed, using recognised clinical dementia measurements, for how the activities had influenced the participants’ quality of life, tendency to wander, level of apathy, levels of depression and anxiety ratings.

The findings indicated that the robots had a positive, clinically meaningful influence on quality of life, increased levels of pleasure and also reduced displays of anxiety. Research has already shown that interaction with animals can have a beneficial effect on older adults, increasing their social behaviour and verbal interaction and decreasing feelings of loneliness. However, the presence of animals in residential care home settings can place residents at risk of infection or injury and create additional duties for nursing staff.

This latest study suggests that PARO companions elicit a similar response and could potentially be used in residential settings to help reduce some of the symptoms – such as agitation, aggression, isolation and loneliness – of dementia.

Glenda Cook from Northumbria University said: “Our study provides important preliminary support for the idea that robots may present a supplement to activities currently in use and could enhance the life of older adults as therapeutic companions and, in particular, for those with moderate or severe cognitive impairment. “There is a need for further research, with a larger sample size, and an argument for investing in interventions such as PARO robots which may reduce dementia-related behaviours that make the provision of care challenging as well as costly due to increased use of staff resources and pharmaceutical treatment.”

The researchers of the pilot study have identified the need to undertake a larger trial in order to increase the data available. Future studies will also compare the effect of the robot companions with live animals.