Robotic Assistance for The Elderly 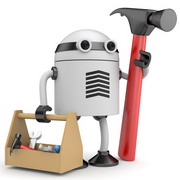 Hector can move around a house
on its own and respond to
commands such as “follow me”;
© panthermedia.net/pixelery

A team of EU-funded researchers has developed a robotic companion and intelligent home environment that could help elderly people live richer and more independent lives and reduce the burden placed on healthcare services.

People are living much longer into old age, and the need for care and medical assistance for elderly populations is growing rapidly. Ideally, elderly people should be able to live happily and independently at home, but medical complications and conditions such as depression and dementia can make this extremely difficult.

“Without support, assistance and cognitive stimulation, sufferers from elderly dementia and depression can deteriorate rapidly; in these circumstances their careers, for instance their spouses or children, face a more demanding task; the elderly and their carers both face an increased risk of social exclusion,” explains Atta Badii of the University of Reading, United Kingdom.

To address these challenges, European researchers are developing intelligent home-help systems and robot assistants which support elderly people to live well and look after themselves. Happier, healthier and more active elderly populations can ease the burden of care on family, friends and health authorities.

Badii, is the coordinator of the FP7 project, “Integrated Cognitive Assistive and Domotic Companion Robotic Systems for Ability & Security” (CompanionAble), which has created a robotic companion called “Hector”. Hector can move around a house on its own and respond to commands such as “follow me” or “go to the kitchen”. He can help users socialise and provide cognitive stimulation in their daily lives. Users interact with Hector directly through voice commands and a large touch screen.

Hector functions autonomously, or as part of a larger-scale intelligent-home system designed to support independent living for elderly people. By controlling smart systems around the house, Hector is able to open and close curtains and windows, turn lights on and off, or regulate the central heating.

Here, Hector bridges the gap between new smart environments that are sometimes difficult to use and elderly people who may not be experienced or able to interact with such systems with ease. As a companion, Hector acts as an intermediary; he makes these systems accessible through more natural interactions.

“Hector can, for example, help his human companion get ready to leave the house,” says Badii. “He approaches his owner and reminds him not to forget to take certain items such as a purse. He can also detect any open windows or doors, or appliances that have been left on, and remind his human companion to deal with these issues before he leaves the house.”


- More about the University of Reading at: www.reading.ac.uk