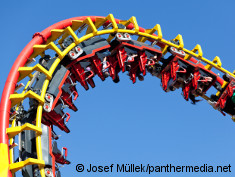 It appears that a 4-year-old-boy had a stroke after riding some roller coasters; © Josef Müllek/ panthermedia.net

Riding a couple roller coasters at an amusement park appears to have triggered an unusual stroke in a 4-year-old boy, according to a report in the journal Pediatric Neurology.

The sudden acceleration, deceleration and rotational forces on the head and neck likely caused a tear in the boy's carotid artery. This tear, called a dissection, led to formation of a blood clot that triggered the stroke, Loyola University Medical Center neurologist Jose Biller, MD and colleagues report.

Strokes previously have been reported in adult roller coaster riders, but there are only a few previous reports of strokes in children who rode roller coasters, including a 13-year-old girl and an 11-year-old boy. The 4-year-old boy described by Loyola neurologists is one of the youngest reported in the medical literature.

Prior to his stroke, the 4-year-old boy was healthy. During an out-of-state vacation with his parents, he rode two roller coasters. The first ride was 679 feet long and 30 feet high, with a top speed of 25 mph. The second ride had a 53-foot drop with a descent speed of 40 mph.

The day after riding the roller coasters, the boy vomited and developed a droop on the left side of his face while on the flight back home. By the time he arrived home, he was unable to walk and had weakness on his left side. He was rushed to the hospital, where imaging exams showed he had experienced a carotid artery dissection and stroke. He received low-dose aspirin and doctors observed a steady improvement. At a six-month follow-up visit, his gait had improved considerably, and he had only mild muscle weakness and stiffness on the left side.

Sudden movements that can hyperextend the neck or rotate the neck – such as whiplash, certain sports movements or even violent coughing – can result in a dissection of the carotid artery. A dissection begins as a tear in one layer of the artery wall. A blood clot can form in the area of the tear. If it's large enough, the clot can block blood flow to the brain. Or, pieces of the clot can break free, travel up to the brain and block blood flow to the brain. In either case, the result is a stroke.

A child under age 10 is vulnerable to sudden neck movements and rotations due to weak neck muscles, a relatively large head and other factors. "This hypermobility, combined with other kinetic and linear forces experienced during a roller coaster ride, could theoretically explain why some children, albeit rarely, sustain dissections," Biller and colleagues wrote.

Biller is an internationally known expert on strokes in children and young adults. He has written a textbook on the topic and is a co-author of the American Heart Association's guidelines for management of stroke in infants and children. Biller notes that about 15 percent of the most common type of strokes (caused by blood clots) occur in adolescents and young adults.

More about the Loyola University Health System at: www.luhs.org