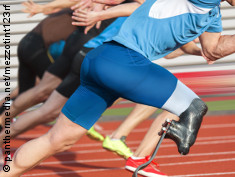 Controversy surrounds the impact of the prosthetic limb technology used by lower-limb amputees in sports; © panthermedia.net/mezzotint123rf

Researchers at Bournemouth University have been looking at the impact of lower-limb prosthetics on competitive running, specifically looking at whether athletes with prosthesis are at an unfair advantage when running against athletes without prosthetics.

The last two Olympic Games in both Beijing and London have had some controversy attached to them regarding the role of prosthetic s limbs used by athletes with a lower-limb amputation.

In 2008, South African Oscar Pistorius ran against able-bodied athletes and obtained an Olympic Qualification time in the 400m. In 2012, he changed the way disability is viewed by the world by participating in both the Olympic and Paralympic Games in the same year. Controversy surrounds the impact of the prosthetic limb technology used by lower-limb amputees.

Hossein Hassani, a researcher at Bournemouth University involved in the project, said on behalf of his colleagues, "These prostheses typically involve the use of composite 'c' or 'j' shaped prostheses and whilst often dubbed 'Cheetahs' by the media, are merely a form of energy storage and return springs."

Previous research has looked at how this technology is perceived by the sports stakeholders and through applying basic engineering principles how it could be performance enhancing. Now the BU team have continued this strand of research, utilising a series of statistical techniques in order to provide informed commentary about the controversy of using prosthetics – and whether those with prosthetic lower limbs running against athletes with no prosthetics are at an unfair advantage.

"Ultimately, this study provides statistical evidence to propose that the number of prosthetic limbs used, the design of such limbs and the length of the event that they are used in has a significant impact on the results of such competitions at the Paralympic Games," Hossein Hossani continues. "As a result, this study reveals that the disability sport stakeholders should not just look at the prosthetics technology generally, they should also consider the type of event that they are being used in and the way athletes within these events are classified."

He adds: "Furthermore, this study adds further weight to suggest that the use of such technology in able-bodied sport needs to be carefully considered in the future – the prosthesis' spring-like design could propel an athlete in a way that is not quite like the able bodied athletes."

The study was carried out at Bournemouth University by Hossein Hassani, Mansi Ghodsi , Mehran Shadi , Siamak Noroozi and Bryce Dyer.

Their findings were also confirmed in a second study, which provided an overview of running performance of athletes with lower-limb amputations at the Paralympic Games between 2004 and 2012. This overview allowed the researchers to gain a greater depth of information about the way athletes use their lower-limb prosthesis when running and whether running performance has changed over time as advances in technology of prosthesis has changed, giving such athletes a competitive advantage.