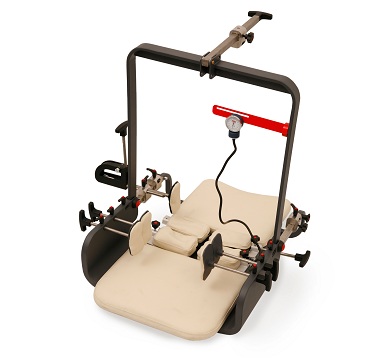 The aim of the innovative rehabilitation method by SKOL-AS device is based on biomechanical reasons triggering the progression of the scoliosis. The aim is to rebuild the muscles functions responsible for correct placements of the spinal cords. SKOL-AS teaches also a new, correct position.

The civilization progress has triggered an appearance of negative condition for development and functions of the body locomotor system. Common way of running the spine correction exercises for children with scoliosis was doubted by specialists and, above all, by patients themselves. Innovative method of scoliosis correction by device SKOL-AS gives a chance to have a different glance at the old tendencies and new possibilities in the mentioned field.

Unique method, combining both active and passive correction was created, based on huge experience of M.D., Ph.D. Andrzej Suchanowski and M.A. Andrzej Stolarz from Gdansk University of Physicial Education and Sport, Poland, supported by Gdansk University of Technology. SKOL-AS was patented in Munich in 2007.
SKOL-AS gives a possibility to treat all kinds of defects of the spine with a very good result. By a system of stabilizing arms that affect the scoliosis passive and active way, the correction in the sagittal, coronal and transverse plane is being effectively realized.

Interactions of these mechanisms are very complex. Muscles are attached to each of the vertebrae, adjusting and stabilising their relative position. It is possible due to muscle-tension, which in turn is controlled by the central nervous system.

Scoliosis (known as lateral curvature) is a disease involving three-dimentional deviation of the spine from its correct state.

Scoliosis consists of:
• changes in sagittal plane – changes manifest themselves through the shallowing or deepening of the natural curvature of the spine leading respectively to lordosis or kyphosis;
• curvature in the coronal plane – a lateral curvature of the spine, resulting from the nonparallel placement of the surfaces of adjacent vertebrae. Disturbances in the two described planes change the shape and functionality of the vertebrae. This dysfunction and axial loads overlapping it cause progression of the pathology of mechanics of the spine;
• curvature in the transverse plane – vertebrae’s cores rotation.

It is related to the excessive load of appendages and the vertebral appendices and arches and thus deepens the bending forward of
the spine. The consequence of this process is an imbalance of passive stabilisation mechanism characterized by the extension of a column of the vertebrae’s cores, and asymmetric expansion
and displacement of intervertebral disc in the direction of curvature. A further consequence of the curvature in the transverse plane is a rib hump or a lumbar hump.