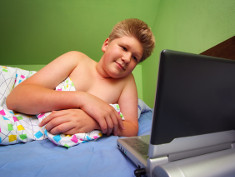 There is a relation between bedroom access to a television or computer and reduced sleep among autistic boys;
© Mikhail Lavrenov/panthermedia.net

Having bedroom access to television, computers or video games is linked to less sleep in boys with autism spectrum disorder (ASD), a team of University of Missouri (MU) researchers found.

"Previous research has shown that bedroom access to screen-based media is associated with less time spent sleeping in the general population," said Christopher Engelhardt, a post-doctoral research fellow at the MU Thompson Center for Autism and Developmental Disorders and the MU School of Health Professions. "We found that this relationship is stronger among boys with autism."

Engelhardt and his colleagues examined the relationship between media use and sleep among boys with autism compared to typically developing boys or boys with attention-deficit/hyperactivity disorder (ADHD). They surveyed parents of boys with ASD, parents of boys with ADHD and parents of typically developing boys about the children's hours of media use each day, bedroom access to media, and the average hours of sleep they received per night. The MU researchers found a relationship between bedroom access to a television or computer and reduced sleep among boys with autism. Additionally, they found that average video-game exposure was related to less time spent sleeping among the boys with ASD.

"Even though our findings are preliminary, parents should be aware that media use may have an effect on sleep, especially for children with autism," Engelhardt said. "If children are having sleep problems, parents might consider monitoring and possibly limiting their children's media use, especially around bedtime." Engelhardt says future research should further explore the processes by which bedroom access to media could contribute to sleep disturbances in children with ASD.

"Our current results were cross-sectional, meaning that we are not able to determine whether pre-bedtime media exposure causes some children with autism to sleep less," Engelhardt said. "However, the relationship between bedroom media access and sleep was particularly large among boys with autism, suggesting that we should continue to carefully research this possibility."

About one in 88 children are on the autism spectrum, according to the Centers for Disease Control and Prevention. ASD is characterized by social and communication difficulties as well as repetitive behaviors. Sleep problems also are highly prevalent in children with autism and may have many different underlying causes. Media use may exacerbate some of these underlying problems, and appears to be an area for future research in helping to improve sleep outcomes for children with autism, Engelhardt said.

"It is also important to note that some media use may also be beneficial for children with autism," Engelhardt said. "Future research is also needed to determine how video games and other technologies may be helpful in teaching and reinforcing skills and behaviors."