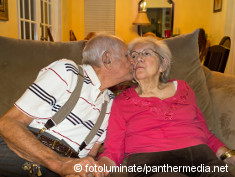 Sexual activity among 70-year-olds has increased from 12 percent to 34 percent for women and from 47 percent to 66 percent for men since the 1970s; © panthermedia.net/ fotoluminate

Based on data from the large H70 and women's population studies, researchers at the University of Gothenburg Center for Aging and Health (AgeCap) have examined the sexual attitudes of senior citizens and identified the factors that determine whether or not they remain sexually active.

Childhood experiences have a major impact on the sexuality of senior citizens. The studies, which offered a unique opportunity to monitor women from middle age to 70 years old, showed that a history of childhood poverty, parental squabbling or divorce, and corporal punishment may reduce sexual desire and activity even in middle age.

"In other words, our studies suggest that women's desire is not decisive for how active they are," Dr. Beckman says. "One reason may be the gender roles that these generations grew up with, which dictate that men always take the initiative."

"The studies found that even people in their late 90s have sexual feelings. While unlikely to be active at that age, they talk about their sexual thoughts and dreams, often regretting that they no longer have the chance to share intimacy with another person."

Dr. Beckman's thesis concluded that half of 97-year-olds have a positive attitude to sex. A total of 88 percent of men and 82 percent of women find it perfectly natural for doctors to ask about their sexuality at checkups.

"Caregivers must be broadminded and open to the fact that love, desire and sexuality do not dissipate as people grow older," Dr. Beckman says. "Doctors and nurses should never hesitate to ask patients whether they are experiencing sexual problems, no matter how old they might be."

More about the University of Gothenburg at: www.gu.se/english