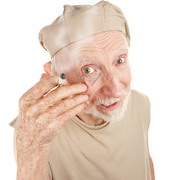 Quitting smoking after a heart
attack cuts risk of a second heart
attack in half; © Scott Griessel/
panthermedia.net

A recent study of adults age 50 to 85 found that only 19 percent of those diagnosed with lung disease quit smoking within two years. Furthermore, the research showed that the vast majority of older adults who learn they have a chronic condition do not adopt healthier behaviors.

The statistics come from the Health and Retirement Study, an ongoing survey of over 11,000 Americans aged 50 or older that began in 1992. A research team led by Jason T. Newsom of Portland State University sought to determine to what degree these adults modified their smoking, drinking, and exercise behaviors after the diagnosis of heart disease, cancer, stroke, respiratory disease, and diabetes.

"Even after an illness has occurred, change in behavior is critical for improving quality of life, reducing risk of recurrence or complications, and extending life," Newsom said. "Quitting smoking after a heart attack, for example, cuts risk of a second heart attack in half."

The largest observed change in behavior was among those who were diagnosed with heart disease, which led 40 percent of smokers to quit. For every disease, smokers decreased the number of cigarettes consumed per day, but only 19 percent of those suffering from lung disease quit.

There were no significant improvements in the percentage reporting regular vigorous exercise (at least three times per week) following the diagnosis of any chronic condition. In fact, the percentage exercising declined significantly for those with cancer, lung disease, and stroke — although this may be due to the physical limitations that can be associated with those conditions.

Changes in alcohol consumption were small, although among those who were currently drinking, those with heart disease, diabetes, cancer, stroke, and lung disease significantly decreased their average number of daily drinks.

Additionally, there were few significant and consistent socio-demographic changes after diagnosis. Women and younger participants were somewhat more likely to decrease exercise and alcohol use. Higher education was associated with smoking cessation, increased exercise, and decreased alcohol consumption.


- More about the Gerontological Society of America at: www.geron.org