Seniors expend as much energy as Tour de France cyclists 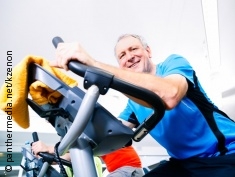 Senios can be burning as much energy as top athletes, research found; © panthermedia.net/kzenon

Well-trained seniors expend as much energy as Tour de France cyclists. New Danish research shows that age is no obstacle to performing at a maximum for a longer period of time. The Department of Biomedicine and the Center for Healthy Aging at the University of Copenhagen are behind this new research.

Is there a limit with ageing to human energetic performance? This was previously an open question, but now researchers from the Department of Biomedicine and the Center for Healthy Aging have come up with the answer. They examined how seniors convert energy when exposed to maximal physical exertion.

"We are very surprised that seniors are able to expend as much energy as elite athletes such as Tour de France cyclists. This is the first study of seniors who've been exposed to this type of hard physical exertion. It's fascinating that, even at an advanced age, our energy can be expended at that level," says Postdoc Mads Rosenkilde Larsen from the Department of Biomedicine and the Center for Healthy Aging.

"Until now, it's been unclear whether seniors can perform at near-maximum rates for humans. These results show that regardless of age, the body does not lose the ability to perform at its maximum over a longer period of time. The only difference being that it takes longer for a senior to cover the distance than it would a Tour de France cyclist," Professor Joern Wulff Helge from the Department of Biomedicine and the Center for Healthy Aging, elaborates.

The researchers also examined whether the seniors were able to eat sufficiently to make up for the energy expended. Their study reveals that this was not the case.

"Despite the fact that the participants doubled their normal food intake, they were simply not able to eat enough to make up for their increased energy expenditure. Furthermore, it is interesting that despite the fact that the cyclists' motivation to eat actually increased, their bodies physiologically reacted in a way that likely did not allow them to match the energy expended," Mads Rosenkilde Larsen concludes.

The research carried out at the Center for Healthy Aging is supported by the Danish foundation, Nordea-fonden. These latest results have just been published in the renowned scientific journal, American Journal of Clinical Nutrition.

REHACARE.com; Source: University of Copenhagen The Faculty of Health and Medical Sciences

More about the University of Copenhagen The Faculty of Health and Medical Sciences at: www.healthsciences.ku.dk