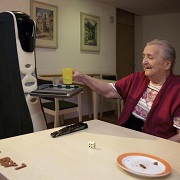 Residents watch the robot with
curiousity and like being served by
him; © Fraunhofer IPA

The "WiMi-Care" project has explored ways in which the robot assistant "Care-O-bot" developed at Fraunhofer IPA can be used to serve drinks to residents at an old people's home and additionally to act as an entertainment platform. Real-world studies have been able to verify the ease of use of the robot by carers, the benefits of the robot as well as its acceptance by residents.

Fraunhofer IPA has been engaged for over 10 years in developing a robot assistant “Care-O-bot” to support people in their day-to-day lives. It is hoped that, in future, the use of such advanced technical assistance systems will enable elderly citizens and those in need of care to live independently in their own homes for longer and thus, despite the anticipated shortage of carers, to maintain a reasonable quality of life.

Now in its third generation, the prototype “Care-O-bot”, in its role as interactive butler, is already capable of carrying out a variety of fetch- and-carry tasks. “Thanks to its nearproduct design, the robot is especially well suited for evaluation by potential end-users,” explains Birgit Graf, head of the Domestic Service Robotics and Personal Robotics group at Fraunhofer IPA.

Within the “WiMi-Care” project the Care-O-bot was for the first time tested for how it interacts with elderly people and those in need of care. A needs assessment was carried out at an old people's residential care home in order to identify two application scenarios for the robot: serving the residents with drinks and use as an entertainment platform. “A key requirement of the scenario selection was to make sure that the robot enables carers to devote more time to residents,” says Graf.

The robot was required to prove its worth in two real-world situations involving carers and senior citizens. “The goal of the second trial was to implement the selected application scenarios on the Care-O-bot in such a way that the robot could be controlled by the carers and thus used in their day-to day work,” explains Graf. The trial assessed how easily the robot could be used by carers, what benefits it delivered and how positively it was accepted by all involved person groups.

To serve residents with drinks, Care-O-bot is capable of using its robot arm to independently fill cups with water from a water dispenser and serve them to residents on its tray. Being connected to a database of residents allows the robot to identify individual residents at the facility. A record of drinks served, which is also stored in the database, enables the robot, as it moves around the facility, to single out those residents who have not had enough to drink. “Selective targeting of residents, combined with active follow-up, means we are able to make sure not only that residents are served with drinks, but also that they actually drink them,” says Fraunhofer researcher Theo Jacobs, who monitored the trial on site.

For use as an entertainment platform, the touch screen of the robot serves to launch games or memory-training programs, play music or recite poems. The robot is controlled by the carers using a specially developed graphical user interface. “With just a few clicks on the user interface, carers can give the Care-O-bot its instructions for the day − and then spend more time with residents,” explains Jacobs.

The trial involved the robot being used mornings and afternoons on three consecutive days, for between one and two hours at a time. As was already the case during the initial assessment phase, there was no fear of contact with the robot. “The residents simply observed Care-O-bot with curiosity and found it fascinating to watch it doing its work. Some of the residents in the dementia unit even developed a real fondness for the robot,” reports Jacobs. The carers, too, were well able to imagine working with a service robot in future.