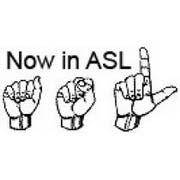 People fluent in sign language may simultaneously keep words and signs in their minds as they read, according to an international team of researchers.

In an experiment, deaf readers were quicker and more accurate in determining the meaningful relationship between English word pairs when the word pairs were matched with similar signs, according to Judith Kroll, Distinguished Professor of Psychology, Linguistics and Women's Studies, Penn State.

The slightly better reaction time and improved accuracy rate indicates that the readers are able to juggle both English and sign language at the same time.

"If a sign language user is a bilingual juggler they might not respond to the connections between the signs and words in a conscious way," said Kroll, who serves as the director of Penn State's Center for Language Science. "But we can design experiments to measure the unconscious response."

The study shows that sign language users are similar to other bilinguals, said Kroll. "This reflects previous research on bilinguals that shows both languages are active even when they're reading or speaking one language," Kroll said.

According to Morford, who was the lead author for the study, the research also represents the growing acceptance among the scientific community that sign language is a real language. "This work is critical to help make the science of studying American Sign Language every bit as rigorous as the study of other languages," said Morford.

The researchers tested 19 deaf adults who were fluent in American Sign Language as they decided whether pairs of English words were related or unrelated in meaning.

When the participants encountered word pairs and signs that were related, the reaction time was significantly faster and more accurate than the reaction of a control group made up of 15 bilingual speakers who spoke English as a second language.

When the word pairs were matched with unrelated signs, the participants' reaction time was slower and less accurate.


- More about Penn State at: http://live.psu.edu