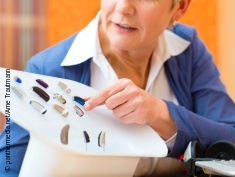 Hearing loss in adults is under treated despite evidence that hearing aid technology can significantly lessen depression and anxiety and improve cognitive functioning.

"Many hard of hearing people battle silently with their invisible hearing difficulties, straining to stay connected to the world around them, reluctant to seek help," said David Myers, PhD, a psychology professor and textbook writer at Hope College in Michigan who lives with hearing loss.

In a National Council on Aging study of 2,304 people with hearing loss, those who didn't wear hearing aids were 50 percent more likely to suffer from sadness or depression than people who did wear them, he said. Additionally, hearing aid users were much more likely to participate in social activities regularly.

Although a genetic condition caused him to start losing his hearing as a teenager, Myers did not get hearing aids until he was in his 40s. Like many hard of hearing people, he resisted hearing technology. People wait an average of six years from the first signs of hearing loss before getting treatment, according to the National Center for Health Statistics, and adults with hearing loss between the ages of 20 and 69 are half as likely as adults 70 or older to use hearing aids, Myers said. Besides denial, vanity and less awareness of how much they are missing are some reasons for the delay, he added.

"Anger, frustration, depression and anxiety are all common among people who find themselves hard of hearing," Myers said. "Getting people to use the latest in hearing aid technology can help them regain control of their life, and achieve emotional stability and even better cognitive functioning."

Myers cited another study published in the Archives of Neurology that found hearing loss could also be a risk factor for dementia. Scientists who conducted the study said years of sensory loss leaves people more susceptible to dementia. Additionally, the social isolation common among the hard of hearing is another known risk factor for dementia and other cognitive disorders, he said.

A technology known as a hearing loop could also help those with hearing loss become more social and involved, said Myers. Like Wi-Fi for hearing aids, the technology uses an inductive loop to transmit sound signals directly into an in-ear hearing aid or cochlear implant, where it is received by an inductive device called a telecoil. Efforts over the last dozen years to have hearing loops installed in public places around the U.S. have gained momentum in recent years with new American manufacturers stepping up to design and market hearing loop amplifiers for a wide variety of installations, from home TV rooms and taxis to auditoriums and airports.

The loop system, which enables hearing aids to serve as wireless speakers, is popular in Great Britain and Scandinavia but less widespread in the U.S. Proponents of the system say it works especially well in public spaces with background noise or reverberant sound, such as train stations and places of worship. Myers' hearing loop advocacy has contributed to more than 500 hearing loop installations in Michigan.