Sleep apnea is common in women with pregnancy diabetes 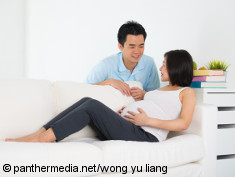 In 25 women with diet-controlled gestational (pregnancy) diabetes, the researchers found a 56 percent prevalence of OSA, a sleep disorder in which a person stops breathing for brief episodes during sleep. This OSA prevalence is similar to how often nonpregnant adults with Type 2 diabetes have OSA, according to the study authors.

"OSA may be an important co-morbidity [co-existing illness] in women with gestational diabetes mellitus," said a study investigator, Sirimon Reutrakul, MD, associate professor at Mahidol University Faculty of Medicine, Bangkok, Thailand. "Our results will have to be confirmed in a larger study but potentially have an impact for patient care."

As many as 9.2 percent of pregnant women develop gestational diabetes, the U.S. Centers for Disease Control and Prevention estimates. Being overweight or obese is a risk factor.

Participants of the new study were considered obese using the World Health Organization cutoff for Asian women of a body mass index (BMI) before pregnancy of 25 kg/m2 or more. The women were between 24 and 34 weeks pregnant, and all had diet-controlled gestational diabetes.

OSA was diagnosed using a home monitoring device (Watch-PAT200, Itamar Medical) worn on the participant's wrist overnight. The U.S. Food and Drug Administration (FDA) has approved this device for detecting OSA. It measures overnight changes in oxygen level in the blood, called oxygen saturation, together with changes in peripheral arterial tone, the degree of blood vessel constriction in the fingers, in response to breathing disruptions. Reutrakul said the Watch-PAT200 had a good correlation with polysomnography, an overnight sleep study conducted in a special lab, when tested in pregnant women and others.

Of the 14 study participants found to have OSA, 12 women had mild sleep apnea and 2 had moderately severe apnea, the investigators reported. There were no differences between women who had OSA and those who did not have this sleep disorder other than a tendency for the OSA group to have a higher average pre-pregnancy BMI than the other group (31.2 vs 29.0 kg/m2).

"If a future study confirms our results, the next step is to explore if treating OSA in these pregnant women will lead to better glucose control and pregnancy outcomes," Reutrakul said.

Poor glucose control during pregnancy can lead to problems for both mother and child, including a higher chance of premature birth or stillbirth, according to the Hormone Health Network.