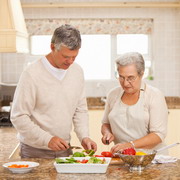 Small group homes for people with dementia provide good quality care and a domestic environment where people can live as individuals and families can get involved.

But tension can arise when it comes to deciding who takes responsibilities for certain practical and caring tasks.

Those are the key findings of a study of two group living care homes in the Netherlands. “It’s estimated that 80 million people worldwide will suffer from dementia by 2040” says Ezra van Zadelhoff from Maastricht University. “Up until now, traditional care for people with dementia has mostly been provided in large nursing homes."

“Our study focused on two group living units that had been established for approximately 30 months, each providing care for ten residents with dementia. Both were located in the grounds of a traditional large-scale, non-profit making nursing home in an urban area in southern Netherlands.”

The units both centre around a communal living room and kitchen. Eight residents have a private bedroom with their own furniture, 12 share a bedroom with someone else and the units are both decorated to create a homely feel.

All residents require 24-hour care and this is provided by nine nursing staff with experience in geriatric care. Nursing staff work with the residents to perform household tasks like washing, cleaning and preparing meals in the kitchen and organise activities like walking, exercises and singing.

A multidisciplinary team - nursing home physician, psychologist, physiotherapist and occupational therapist - are involved as required. Both units adhere to a ‘home for life’ principle, with residents staying there until the end of their lives.

The key headline findings and observations included: Residents felt at home and most gathered in the living room during the day to talk, drink coffee or read. Everyday activities provided stability and clarity. People were also able to get involved in familiar activities, like laying the table or washing-up, and this helped them to maintain their identity and feel more at home.

Family members were able to get more involved in the group home than they could do in a nursing home. They were treated as members, rather than visitors, had a key and tended to visit more regularly, often helping with personal care and chores.

“The findings of our study indicate that the key to providing person-centred care for people with dementia is to enable people to be themselves and live in an environment where they and their families can get involved in normal daily activities” says Ezra van Zadelhoff.

“However the model is not without its problems. Nursing staff get more involved with residents and this can conflict with their clinical and professional distance. And the families in our study varied in how much they wanted to get involved in the care provided by the home, which sometimes led to tension.”