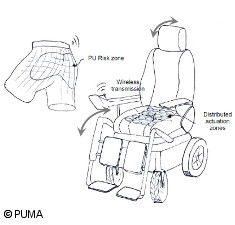 The cushion and the shorts send information in real time to a computer system embedded into the wheelchair which is controlled via a Smartphone app; © PUMA

The European research project PUMA (Pressure Ulcer Measurement and Actuation) technically coordinated by the Biomechanics Institute (IBV) has developed a portable and non-invasive device to prevent and early detect the risk of Pressure Ulcer (PU) development and revert its onset for Tetraplegic Spinal Cord Injured (T-SCI) individuals relying on wheelchairs.

Nowadays, PU treating costs €20 billion per year to the EU Public Health Care System. Although, PU prognosis is excellent at early stages being 95 percent preventable, current solutions are not being effective as they rely on pressure reduction instead of tissue viability, do not consider user state, characteristics and context, and do not optimally combine current strategies to prevent PU.

According to the IBV Innovation Director of Rehabilitation and Personal Autonomy, Ignacio Bermejo, "PUMA device has three independent systems that allow preventing PUs because it detects and eliminates the risk of PU development though proposing different strategies to the users."

Specifically, "we refer to the postural control system of the wheelchair, a dynamic cushion and a smart textile embedded in a pair of shorts for measuring pressure, tissue viability and apply Functional Electro Stimulation (FES)."

The cushion and the shorts send information in real time to a computer system embedded into the wheelchair, which is controlled by the user using a Smartphone app. This application evaluates the data and is able to identify postural risks in each situation.

"For example, the application could detect the limit time spent in the same position and, depending on the context, propose various actions to prevent the PU formation: changes in chair position (back, seat and footrest), modify cushion or directly applying electro stimulation in risk areas," adds Ignacio Bermejo.

As explained by the technical project manager, José Laparra, "PUMA solution is the result of a two-year research project. During the first stage, we gathered information about the needs and anthropometric and physiological characterization of T-SCI patients that adversely affect the occurrence of PU. Afterwards we studied and compared different tissue viability measuring systems in order to embed them in smart textiles."

Besides IBV, the Project consortium is composed by QIMOVA AS (Denmark), as coordinator, BerkelBike (Netherlands), SensingTex (Spain), Estonian Innovation Institute (EII) and Centexbel (Belgium).
The National Paraplegic Hospital of Toledo (FUHNPAIIN) has collaborated in the validation of the final device with real users and the team of prosthetics technicians at Fundosa Accesibilidad, company of ILUNION group (previously named Vía Libre), have also taken part in the consortium.

The PUMA project is funded by the European Commission within the Seventh Framework Research Programme 2007-2013, in the specific program "capabilities" in its call 2012 called "Research for the benefit of SMEs", with a total duration of 27 months with the contract number 315114.