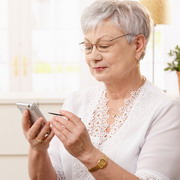 The treatment for memory
impairment could include a
prescription for a smartphone;
© panthermedia.net/nyul

A smartphone training program, theory-driven and specifically designed for individuals with memory impairment, can result in "robust" improvements in day-to-day functioning, and boost independence and confidence levels, according to Baycrest Centre for Geriatric Care.

Memory impairment, particularly when it is severe, can impact virtually all aspects of everyday life. Individuals are unable to readily acquire new information making it difficult or impossible to keep appointments and stay on top of changing personal, social and occupational responsibilities.

The Baycrest study involved 10 outpatients, 18 to 55 years of age, who had moderate-to-severe memory impairment, the result of non-neurodegenerative conditions including ruptured aneurysm, stroke, tumor, epilepsy, closed-head injury, or anoxia (insufficient oxygen to the brain) after a heart attack.

Participants completed two phases of training on either a smartphone or another personal digital assistant (PDA) device. Prior to the training, all participants reported difficulty in day-to-day functioning. Some required ongoing supervision and regular assistance from family members due to their forgetting to pay bills, take medications or attend appointments.

In the first phase, instructors from Baycrest's Memory Link program taught participants the basic functions of their device, using an errorless fading of cues training method that tapped into their preserved implicit /procedural memory. Each participant received several one-hour training sessions to learn calendaring skills such as inputting appointments and reminders.

In the second phase, participants took the device home to apply their newly acquired calendaring skills in real-life situations. This included setting alarm reminders to take medications and attend future appointments, charging the device, and remembering to keep the device with them at all times. They also learned how to use other software functions, such as phone, contacts, and camera.

As part of the outcome measures, participants were given a schedule of 10 phone calls to complete over a two-week period at different times of the day – to closely approximate real life commitments. Family members who lived with participants kept a behavioural memory log of whether real-life tasks were successfully completed or not by their relative. Participants and family members completed a "memory mistakes" questionnaire which involved rating a list of common memory mistakes on a frequency-of-occurrence scale, ranging from "never" to "all the time".

All 10 individuals showed "robust increases" in day-to-day memory functioning after taking the training, based on results from the functional and questionnaire-based measures. Participants continued to report benefit from smartphone and PDA use in short-term follow-up three to eight months later.


- More about the Baycrest Centre for Geriatric Care at: www.baycrest.org