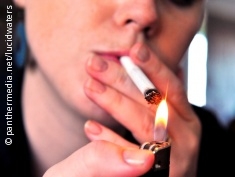 When compared with people who never smoked, current smoking increased the risk of type 2 diabetes by 37 percent; © panthermedia.net/ lucidwaters

Current smokers and people regularly exposed to second-hand smoke have a significantly increased risk for type 2 diabetes compared with people who have never smoked, according to a new meta-analysis conducted by researchers from Harvard T.H. Chan School of Public Health, Huazhong University of Science and Technology, Wuhan, China, and National University of Singapore.

The researchers estimated that 11.7 percent of cases of type 2 diabetes in men and 2.4 percent in women (about 27.8 million cases in total worldwide) may be attributable to active smoking. They also found that risk decreases as time elapses after smokers quit.

"Cigarette smoking should be considered as a key modifiable risk factor for diabetes. Public health efforts to reduce smoking will have a substantial impact on the global burden of type 2 diabetes," said co-author Frank Hu, professor of nutrition and epidemiology.

The study will be published September 18, 2015 in The Lancet Diabetes & Endocrinology.

While the evidence pointing to smoking as a risk factor for cancer, respiratory diseases, and cardiovascular disease is overwhelming, corroboration of a link between smoking and type 2 diabetes risk has been slower to build. In 2014, the U.S. Surgeon General's report for the first time included a section on smoking and diabetes risk and argued for the causal relation between them, although it did not discuss the relation of passive smoking and smoking cessation with diabetes risk.

Among current smokers, the amount smoked made a difference. The increased risk of developing type 2 diabetes was 21 percent, 34 percent, and 57 percent for light, moderate, and heavy smokers, respectively, compared with never smokers.

"Despite the global efforts to combat the tobacco epidemic, cigarette use remains the leading cause of mortality and morbidity worldwide," said An Pan, the first author of the study and professor of epidemiology at School of Public Health, Tongji Medical College, Huazhong University of Science and Technology, China. "This study underscores the importance of implementing and enforcing the provisions of the WHO Framework Convention on Tobacco Control. The smoke-free policies can provide protections for non-smokers and may lead to increased successful cessation in smokers."

The authors also called for more research into the mechanisms underlying the short-term increased risk of diabetes in recent quitters in order to help develop interventions to improve smoking cessation and prevent diabetes.

More about Harvard School of Public Health at: www.hsph.harvard.edu