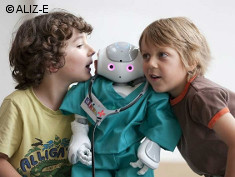 The robot helps children to understand diabetes more and absorb the huge amount of information they are given in a way they can understand; © ALIZ-E

Social robots are helping diabetic children accept the nature of their condition and become more confident about their futures, scientists have announced following a four-and-a-half year research study.

ALIZ-E – an €8.3million initiative funded by the European Commission and led by Plymouth University – has shown young people are more inclined to perform tasks related to their condition if prompted to do so by a friendly interactive robot. Now researchers believe the robots could assist children with other medical conditions, such as autism, or act as classroom assistants aiding pupils who may be in danger of falling behind their peers.

ALIZ-E uses 'Nao' robots – each standing around 60 centimetres tall – and equips them with specially designed speech recognition software through which they can interact with a child and deliver personalised responses. During the course of the project, they have been tested through dozens of studies, involving hundreds of children aged 7-11, in hospitals, summer camps and schools across Europe.

Tony Belpaeme, Professor in Cognitive Systems and Robotics, and academic lead for ALIZ-E, said: "This is not just about a novelty factor catching the youngsters' attention, it is about the robots engaging in a way the children accept and giving them information they can understand and be motivated by. In many cases where a child has diabetes, you notice their confidence has been knocked and the robot can help restore that. By personalising its responses and recognising the children it has met before, the robots can support and educate, and we have seen many times the positive impact this is having on children and their families."

At its outset in 2010, the initial aim of the ALIZ-E project was to build the artificial intelligence (AI) for small robots and to study how young people would respond to them. Long-term human interaction has tremendous potential, as the robots can then be used to bond with people and provide both support and education.

To build the software, the partnership amassed experts from across Europe, and the work has led to a raft of scientific insights on how children relate to social robots, but also how robots need to be designed to maximise their impact when used for educational or therapeutic purposes.

"The robot needs to personalise what it does. If it treats children on an individual level, they immediately relate to it - it taps into our primitive need to interact and communicate. One of the things that does appeal to children is that the robot does make mistakes – if it never did so, it could become intimidating. It does make the child realise they too don't have to be perfect all of the time," Belpaeme said.

The prototype robots were initially tested at a hospital in Milan, the Fondazione Centro San Raffaele, and following initial success trials were then carried out in 11 other centres across Europe.

Among the tasks performed by the robots assisting children with diabetes is in keeping a diary in which they record food intake, insulin injections and blood sugar levels, with the study showing youngsters provide more information if a robot has prompted them to do so. For those on return visits, the robot helps children – through a number of quizzes and games – to understand diabetes more, and absorb the huge amount of information they are given in a way they can understand.

As well as being used in a healthcare setting, the ALIZ-E project has also seen the robots tested in schools to assess other potentially positive impacts they could have on children. In one school, the robot taught eight-year-olds about prime numbers – researchers were able to show that a robot teacher results in a noticeable improvement over teaching using only computers.

Belpaeme believes those tests – largely conducted in the Plymouth and Devon areas – have shown there is potential for the robots to act as teaching assistants, not replacing teachers but helping children who may be in danger of falling behind their peers.

With the ALIZ-E project now reaching its conclusion, the Plymouth University team are also now exploring other uses for the robots, and believe the same software developed during the project could help children on the autistic spectrum.

"Our initial work shows it could have an incredibly positive impact on those children, and given that autism can impact heavily on someone's ability to communicate and build relationships, we now need to establish why it seems they can relate to a tiny robot," Belpaeme said. "From that, we can explore how widely we can use the robot as a therapeutic tool and can we, in fact, use it to teach about wider social interactions."