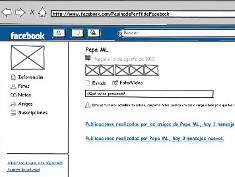 The author of this study – which is still in an experimental stage – is Josefa Molina López, coordinated by Nuria Medina Medina, a member of the GEDES research group of the Department of Programming Languages and Systems of the University of Granada. "So far, there were only social networks specifically designed for blind people, as Blindworlds, but social networks were not fitted with screen readers to make them accessible to blind people," Josefa Moina states.

The researchers used the results obtained during this stage to figure out how to improve Facebook's accessibility. To achieve this, they used atomic refactoring sequences – changes that improve the internal structure of the code but do not change its external behavior. In all cases, they achieved to reduce the time devoted by the blind to perform the tasks. In fact, they even could perform some tasks they had not been able to perform before.

More about the University of Granada at: www.ugr.es