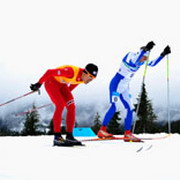 Around 4,000 guests and spectators, coaches and athletes from 13 countries attended a spectacular Opening Ceremony to mark the start of the International Paralympic Committee (IPC) Biathlon and Cross-Country Skiing World Championships in Khanty Mansiysk, Russia.

The celebration of sport started with a laser show and theatrical performance before Natalya Komarova, the Ugra governor, Pavel Kolobkov, Deputy Minister of Sport, Tourism and Youth Policy in Russia, and Rob Walsh, Representative of the International Paralympic Committee, welcomed the athletes and the spectators.

In her words of welcome Natalya Komarova wished good luck to all the participants: “On behalf of all the Ugra citizens I greet the strongest National teams for the 10th IPC Biathlon and Cross-Country Skiing World Championships. This is the first time that Russia has hosted such an event and we’re endlessly glad that Khanty-Mansiysk is honored to host the Championships.

“We worked hard to create the best conditions for all those taking part in the competitions, to ensure they have a good time and get acquainted with original culture and traditions of the Ugra peoples.”

According to Rob Walsh the Championships will be the high point of the 2011 season: “This is a special event for Russia which will host the Paralympic Winter Games in 2014. We think that the World Championships in Khanty-Mansiysk is an important step on the way for Sochi. I would like to thank everybody who has helped organize this event on behalf of the participants. The conditions are excellent.”

The Opening Ceremony came to a close with the raising of the IPC flag, an honor given to Russian National team captain Irek Zaripov, a winner of four gold medals at the Vancouver 2010 Paralympic Winter Games.

Nearly 100 skiers from 13 countries are in the Russian city of Khanty Mansiysk for the World Championships which take place from 2 to 10 April. The event is the first World Championships in the two sports since the Vancouver 2010 Paralympic Winter Games.


- More about the IPC at: www.paralympic.org