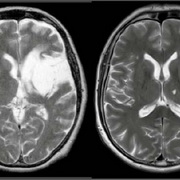 MRI was used to assess the exact
brain areas affected in each
patient; © MPG

After a left-sided stroke, many individuals suffer from serious speech disorders but are often able to sing complete texts relatively fluently. Researchers at the Max Planck Institute for Human Cognitive and Brain Sciences in Leipzig, Germany, have now demonstrated that it is not singing itself that is the key.

Instead, rhythm may be crucial. Moreover, highly familiar song lyrics and formulaic phrases were found to have a strong impact on articulation – regardless of whether they were sung or spoken. The results may lead the way to new rehabilitative therapies for speech disorders.

When a stroke damages speech areas in the brain’s left hemisphere, sufferers often have severe difficulties speaking – a condition known as non-fluent aphasia. Sometimes the inability to speak spontaneously is permanent. However, there are frequent cases of aphasics who are able to sing song lyrics and formulaic phrases relatively fluently. Until now, this astonishing observation has been explained by the fact that the right brain hemisphere, which supports important functions of singing, remains intact. Singing was thought to stimulate areas in the right hemisphere, which would then assume the function for damaged left speech areas. A treatment method known as Melodic Intonation Therapy is based on this idea.

To find out whether and how singing works, Stahl and colleagues conducted a study in which 17 stroke patients with resulting non-fluent aphasia had to articulate several thousand syllables, which were sung and recited with rhythmic or arrhythmic accompaniment. The texts selected were linguistically similar but varied greatly in their level of familiarity and how formulaic they were.

The results showed that singing was not the decisive factor for the patients. Singing the texts did not produce better results than speaking them rhythmically. “The key element in our patients was, in fact, not the melody but the rhythm” says Stahl. The positive effect was greatest in patients where deeper brain areas, known as the basal ganglia, were affected. These areas are known to be crucial for rhythmic processing.


- More about the Max Planck Institute for Human Cognitive and Brain Sciences at: www.mpg.de/en