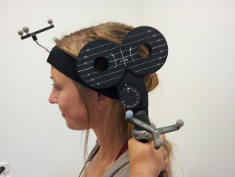 A Kiel University scientist investigates which areas in the brain really are in charge of speech, and how these interact. Her findings are supposed to help patients who have speech production problems or aphasia following a stroke.

With right-handed people, it is positioned in the left side of the brain; left-handed people have it (usually) in the right side: the location of speech production has been known for quite some time. But it is not that simple, states psychologist Gesa Hartwigsen, Professor at Kiel University. In her current scientific publication she investigates which areas in the brain really are in charge of speech, and how these interact.

Gesa Hartwigsen and her team started by analysing speech production. They let healthy right-handed test persons listen to words, which they should then repeat. “These were pseudo words such as `beudo`. In German, they don’t have any associated meaning. Therefore, when hearing and repeating these words, no areas of the brain that had a connection to the meaning of what had been heard were activated,” said Hartwigsen.

The psychologist applies a combination of non-invasive methods (fMRI – functional magnetic resonance imaging and TMS – transcranial magnetic stimulation) to deduce what happens in the brain during the test. “We thus proved that the left hemisphere, as expected, was activated during speech production, while the right hemisphere did not actively contribute to language function,” explains Hartwigsen. This is the regular functionality within a healthy brain. From these results as well as others, scientists had up to now deduced that the right hemisphere did not contribute to speech production in the healthy system and was therefore suppressed.

With a second test, the Kiel University scientists simulated a dysfunction in the brain comparable to a stroke. A magnetic coil transmits a current pulse that interrupts the function of the area responsible for producing speech (Broca’s Area) in the left hemisphere. This completely harmless method influences the speech production of the volunteers for about 30 to 45 minutes. “During this period, the ability to listen and repeat was tested again. While we observed a suppressed activity in the left hemisphere during repeating, with some test persons taking longer to repeat the pseudo words, we also found unexpected activities in the right hemisphere,” reports Hartwigsen.

In collaboration with the Department of Neurology at Kiel University, a stroke specialist from Leipzig and doctoral students of Medicine and Psychology, Gesa Hartwigsen has started a follow-up study on the recent publication. “We would like to find out more about the collaboration of the hemispheres and the right timing in helping stroke patients to recover,” says Hartwigsen. Her field of research is fairly new within the cognitive neuroscience. Nevertheless, she is positive that it will offer practical help in the form of concrete therapies within the next ten to fifteen years.