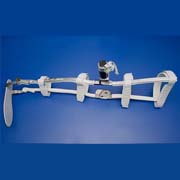 The prototype of an active knee
orthosis; © UPC

The aim of the project is to design customised assistive devices for each individual case of spinal cord injury. Customisation will improve patient autonomy and facilitate adaptation to the device. It is hoped that the orthosis will improve quality of life for users, save money, and cut the time it takes to acquire the final product.

The first device developed within the framework of the project is an active knee-ankle orthosis. The prototype orthosis was designed and built at the Biomechanics Laboratory of the Barcelona School of Industrial Engineering, where researchers analyse the dynamics of the human gait and use the results to design body-worn devices that support movement in people with incomplete spinal cord injuries.

“The patients these devices are aimed at have limited control over the movement of their knee and ankle joints,” says Josep Maria Font, the UPC researcher responsible for designing the first prototype.

The Biomechanics Laboratory is equipped with an optical system consisting of 12 cameras that measure and capture the movement of the human body while a subject is walking. The system simultaneously measures foot-ground contact force by means of force plates which contain four triaxial force sensors. An electromyography system is also used to record muscle activity.

The team involved in the project (made up of professionals in engineering, medicine and orthopaedics) is also developing a computer simulation that will make it possible, based on gait analysis and modelling of the human body, to predict how a person with a spinal cord injury will move when wearing the orthosis. With this information it will be possible to design customised assistive devices for each patient.


- More about the Universitat Politècnica de Catalunya at: www.upc.edu