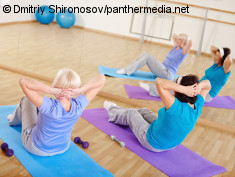 A study developed at the Miguel Hernández University of Elche (Spain) has preliminarily concluded that people with multiple sclerosis may reduce perceived fatigue and increase mobility through a series of combined strength training and fitness exercises. The student of the Master's Degree in Sports Performance and Health Ramón Jesús Gómez recently presented the conclusions of the study.

The research, supervised by Raúl Reina, aimed to analyse the effects of strength training on the fatigue that MS patients suffer. A total of 19 participants (5 men and 14 women) were split into two groups, most took part in a 12-week training programme, whilst others were included in a control group. The research was conducted in collaboration with the Neurology Department of Elche General Hospital.

A first phase of general fitness was followed by a personalised intervention programme based on each patient’s maximum force. The scientists assessed the effects of training and found that the experiment group gained "a fair amount" of functionality while the control group remained stable.

One patient, who was diagnosed the illness in 2007, says she has noticed improvements in her daily routine: "I was used to a life with limitations and now I can pick up my son and go with him to the park on foot."

The training and data collection process took place on campus, both at the sports facilities and the university’s Sport Research Centre. Meanwhile, perceived fatigue was registered daily, weekly and monthly through specific questionnaires. Each patient’s muscle strength was assessed by isokinetic dynamometry and functional tests.

The study also includes an analysis of motivational aspects and an interview on the perception of the effects of sport. This part is especially interesting as it shows an improvement of the participants’ quality of life, although the University will continue working with the MS sufferers to see the long term effects.