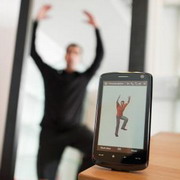 Stop being lazy: The figur in the
screen shows you how;
© Fraunhofer IIS

Researchers at the Fraunhofer Institute for Integrated Circuits IIS in Erlangen have developed an intelligent assistance system designed to motivate you towards more exercise while providing advice in the form of exercise pointers.

Eating a healthier diet, getting more exercise and doing more sports – lots of people recommit themselves to these goals over and over. But one's baser instincts are often stronger and invincible. On the couch in the evening, you take stock of the day only to admit that you have failed to rally once again. And yet, physical fitness is now considered a remedy for many illnesses.

Particularly for older people, daily exercise is important – not only during rehabilitation following major surgery but also for one's general sense of physical well-being.

"Did I do that right? Or should I raise my arm higher?" Questions like these are usually answered by the trainer in the fitness studio. Whether you have done an exercise right or wrong is important if training is to succeed. Unfortunately, this response is available only from trained sport therapists, not when exercising alone at home.

The electronic Fitness Assistant consists of a sensor suit that collects information about its wearer's movements and transmits current measurement results to a television, computer or smartphone. During exercises, a T-shirt monitors the wearer's breathing.

The smartphone provides a user interface, analyzes the collected data, gives the user feedback on the success of his or her training and can instruct the user on gymnastics or rehabilitation exercises. Plus it is all individually tailored to the needs and demands of the individual wearer.

First, a trainer or physical therapist creates a personal training plan on the electronic Fitness Assistant. Under his or her supervision, all of the exercises are recorded once to ensure that they perfectly match the user's own performance levels. Then, the exercises can be repeated in the home environment. An "avatar," a digital trainer, performs the exercises in real time – on TV, for instance.

The program then compares the exercise being performed with the results of the recording and makes any needed adjustments to the wearer's posture. The goal is to playfully motivate the wearer to exercise more. The areas of application include exercise programs for senior citizens or patients undergoing rehabilitation. Combined with digital games – gaming consoles have shown how it is done – the electronic trainer can also be tailored for use by younger people.