Staying healthy while getting older 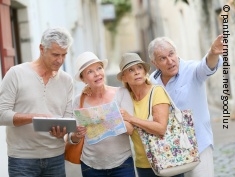 Many senior citizens do not feel old, but they may still feel uncertain about certain aspects of ageing. To enable older people to stay healthy for as long as possible, the Institute of Psychogerontology (IPG) at Friedrich-Alexander-Universität Erlangen-Nürnberg (FAU) is launching a new model for individual consultation linked to academic research.

The 'Beratung für gesundes Altern' (BegA) concept is aimed at senior citizens and their relatives. The project is being funded by Theo und Friedl Schöller-Stiftung for five years.

A 70-year old is crossing the street when suddenly, as if from nowhere, a car sounds its horn. It has come to a stop just a metres away – no harm has been done. The 70-year old did not see the car until then. These are the kinds of mishaps that some older people are unable to explain and which lead them to think that something might be wrong with them. This leaves them feeling uneasy or scared.

Noticing these signs of ageing can often be a source of worry for senior citizens. However, many of those affected do not want to go straight to a hospital, a neurologist or a psychiatrist with their questions. This may be because they are worried that if the results of a medical examination show a loss of function they will be passed on to the authorities, which may result in negative consequences, such as them losing their driving licence.

The ageing process can be associated with many changes that lead to subjective or objective loss of cognitive or physical function. However, Prof. Dr. Frieder R. Lang, head of FAU's Institute of Psychogerontology explains, 'Many losses that older people experience do not require any specific medical treatment. Nevertheless, many people have a lot of questions and the demand for advice is often high.'

For this reason, IPG is launching an innovative consultation model – the first of its kind in Germany – in January 2016. The project is being funded by Theo und Friedl Schöller-Stiftung, based in Nuremberg, for a period of five years. The new concept, which is linked to the University but is explicitly non-clinical, is called 'Beratung für gesundes Altern' (BegA, advice for healthy ageing). It aims to provide prevention-orientated advice that is specially designed for older people, as well as their relatives. It will help those affected to prepare themselves to deal with possible losses of function due to ageing. BegA is being run by an interdisciplinary team of gerontologists, psychologists, doctors, social workers, occupational therapists and other specialists led by Prof. Dr. Frieder R. Lang and his colleague Dr. Roland Rupprecht.

The experts will provide advice on key topics related to the ageing process, such as what can I do to stay fit? How can I eat healthily at 50 and above? How can I maintain my independence? "We have made our concept easily accessible in order to reach a lot of people," Dr. Roland Rupprecht says.

Those affected will have the opportunity to discuss current questions and problems in a non-binding initial consultation session that is free of charge. The consultant will then determine whether the person requires further diagnosis or assistance. Participants will also be offered preventative courses and annual check-ups. The project will be strictly confidential, with participants being able to decide themselves how their data is used.

The researchers aim to use the anonymised data that is collected as part of the BegA project to investigate a variety of research questions, such as how effective the preventative measures are for the participants and how the cognitive performance of people who decided to participate in BegA because of subjectively perceived memory problems changes in the long term. Another possible topic is how senior citizens deal with the voluntary decision to stop driving.

More about the Friedrich-Alexander-Universität Erlangen-Nürnberg at: www.fau.eu