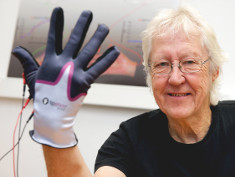 Together with colleagues, Hubert Dinse developed a stimulation glove for stroke patients; © RUB

A team headed by Hubert Dinse and Martin Tegenthoff has successfully treated a number of patients with stroke-related impairments.

The gold standard for acquiring new skills is: practise, practise, practise. Playing an instrument or reading braille on a regular basis improves both the motor skills and the sense of touch – because practising results in changes within the brain. Those areas of the brain that represent the hand region enlarge through training. The Ruhr-University Bochum (RUB) researchers have achieved the same effect through passive stimulation. As they repeatedly stimulated their subjects' fingers using a specific temporal pattern, the respective cortical maps enlarged. At the same time, the sense of touch in the stimulated fingers improved. People suffering from brain damage such as stroke patients benefit from this effect.

In Germany, almost 270,000 people suffer from stroke every year. The most frequent damage affects the sense of touch and motor skills. In collaboration with various rehabilitation clinics, the RUB researchers have tested the feasibility of passive stimulation as a therapeutic option: about 50 patients were treated after a stroke (sub-acute phase) and several chronic patients were treated long-term over many months. The RUB researches measured the sensitivity of the sense of touch as well as proprioception, i.e. the perception of one's own body, as well as motor behaviour. Using standardised test batteries, they also tested everyday life situations: picking up small items, mimicking a feeding behaviour or stacking objects. In almost all cases, the performance improved significantly, although depending on the severity of the stroke event, full recovery is difficult to achieve as is the case with standard therapy.

The chronic patients regularly applied repetitive stimulation at home, 45 to 60 minutes per day, five days a week, over a period of more than one year. One advantage is: passive stimulation does not require active participation or particular attention; it can be applied during other activities, such as going for a walk, watching television or reading. Electrical contacts that are integrated into the glove as thin conducting material transmit electric pulses to the fingertips. The patients control the intensity of the stimulation, which should be felt distinctly. Many describe the resulting sensation as a sort of "finger massage".

The RUB neuroscientists have been researching passive stimulation for many years, not only in brain-damaged patients, but also in healthy people, both young and old. It is quite common for the sense of touch to imperceptibly deteriorate with age. Older test participants have a higher discrimination threshold than younger ones meaning their tactile acuity is worse. Acuity specifies how large the distance between two stimuli has to be for a person to feel them as two discrete sensations. Through passive stimulation the age-related reduction in acuity has been alleviated, bringing participants aged 70 and older back to acuity values commonly found in participants of 50 years of age.

More about the Ruhr-University Bochum at: www.ruhr-uni-bochum.de