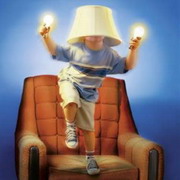 A photo used to spur discussion
during storytelling sessions;
© TimeSlips

Researchers have found that participation in TimeSlips, a drug-free, creative storytelling intervention, improves communication skills and positive affect in persons with dementia.

Nearly 16 million Americans will be diagnosed with Alzheimer's disease or another type of dementia by 2050, according to the Alzheimer's Association. Symptoms include mood and behavior changes, disorientation, memory loss and difficulty walking and speaking. The effects of anti-dementia drugs on patients' emotions and behaviors are inconsistent.

TimeSlips is a nationally recognized storytelling program for people with dementia that encourages participants to use their imaginations to create short stories as a group. Rather than relying on factual recall, participants respond verbally to humorous images presented by facilitators who record the responses and read narratives to further develop or end the stories.

"TimeSlips provides rich, engaging opportunities for persons with dementia to interact with others while exercising their individual strengths," said Lorraine Phillips, assistant professor in the Sinclair School of Nursing. "It encourages participants to be actively involved and to experience moments of recognition, creation and celebration. Meaningful activities, such as TimeSlips, promote positive social environments that are central to person-centered care."

The storytelling program is an easy and affordable activity for long-term care facilities to implement and allows caregivers to interact with multiple residents at a time. Phillips said: "TimeSlips offers a stimulating alternative to typical activities in long-term care facilities. It is an effective and simple option for care providers, especially those who lack resources or skills required for art, music or other creative interventions."

In the study, the researchers delivered the TimeSlips intervention in one-hour sessions, held twice weekly for six consecutive weeks. The results included increased expressions of pleasure and initiation of social communication.


- More about the University of Missouri-Columbia at: www.missouri.edu
- For more information about TimeSlips, visit: www.timeslips.org